“There’s nothing better than riding a good horse through new country.” -Augustus McCrae 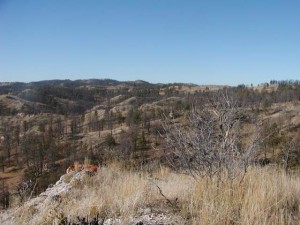 A few days ago, on the most perfect of Fall mornings, Del and I saddled up and rode off through some new, beautiful, and rugged country.  To the casual obserever it would have looked like just a couple guys taking their colts out for a joy ride.  We were, however on official business.  Our bred heifers are grazing a pasture 4 – 5 miles from the point these pictures were taken.  Our mission is to drive them home through those hills after the grazing season is over.  It may have looked like we were just having fun but we were scouting the trail.  The first thing we came upon were tracks that were very fresh and looked like yearling cattle.  We assumed my neighbor who summers in that pasture must have left 10 – 15 head behind.  When we got to the first gate the tracks just went right up and over and kept going.  Must have been a nice bunch of elk and we were not very far behind them, but we never saw them.  So Del and I aren’t going to make much money as professional trackers; but as trail scouts… we might just do that for free.  We had a great time.

The Bull Sale catalog is at the printer and should mail late this week or early next week.  I expect the online version to be up later today.