We only have a few bulls available so we are just offering them on a first come first serve basis.  No catalog, no opening date.  If you want some just come pick them out.

DO THE SHOSHONES MAKE THE BEST COWS?

I was asked this question recently by an astute, observant, commercial cattleman.  It caught me somewhat off guard as a myriad of thoughts and images flooded my mind.

I think first off it is a tremendous credit to Larry Leonhardt that the question would even be asked.  To have the name Shoshone stand for a specific type that remains consistent over time is a great credit to the man that continues to husband the nucleus Shoshone gene pool.  One might ask about a sire, “Do the Final Answer daughters make the best cows?”, but to just refer to a herd and expect that one answer can cover the entire herd says a lot about the selection criteria and methodology behind the creation and continuation of the strain.

I thought about what was meant by the word “best”.  Thousands of Shoshone females have left Cowley, WY and it seems that almost universally the subsequent selection direction has been to change them from what they are to something else.  Human nature being what it is, we are not easily satisfied, but clearly most people who have had Shoshone cows have thought they could be made better with directional selection.  I remembered too the cows in my own herd that most people pick.  In any one moment in time people always like the bulkier young females.  They are deemed the “best” for that moment but as the moment passes into days and years the bulkier young “best” females seldom persist.

I thought about the vigor, strength, and production needed to be the “best” commercial range cow.  I know that a percentage of our closer bred cows can’t compete in those categories as individuals but as parents they can contribute the genetics for those qualities very well.  So maybe it isn’t the Shoshone cow at all but the underrated maternally prepotent Shoshone bulls that “make the best cows”.

I also had to think about my naivete and disillusionment as I have progressed through my first decade with Shoshone genetics in my herd.  I assumed that everyone would desire and value the same characteristics that I do.  Not so.  I am continually shocked at the contempt 4-H and FFA trained livestock evaluators have for slope from hooks to pins.  This characteristic which is universal in nature and vital for maternal calving ease, freedom from infection, and fluid movement is held in utter disdain by even the most experienced cattlemen.  The properly functioning endocrine system which produces fertility,  overall feminine grace and symmetry is completely misunderstood and undervalued.  And finally, in our blind lust for performance, low EPD’s are a non-starter,  even if the cow weighs 1350 and has a 700# calf at her side.

Finally, without first hand knowledge, people seem unimpressed with the intelligence, demeanor, and mothering ability of the Shoshone cow.  Calving these cows is an absolute joy.  They are good at it, wired up for it, and smart about it.  They don’t misplace their calves.  They are cooperative with humans.  They love being moms.  I had a heifer get bred to a Simmental bull.  When I got there in the morning the calf and cow were alive but neither could get up.  I pulled the calf around to see if he would nurse.  The heifer, so willing and helpful, put her leg back and rolled over on her back like an old sow to expose her udder so that her paralyzed calf could nurse.  In a day or two he got up and then she got up and then she bred back and weaned him and life goes on.  That cooperative, helpful, nurturing, attitude is invaluable to me.

Do the Shoshones make the best cows?  If one looks at the market, certainly the money flows to other types of cows that are perceived to be more profitable.  In an industry that does not and cannot measure inputs our perceptions are skewed by marketing, hearsay, and academic research.

So to answer the question, I can tell you without reservation that for either seed stock or commercial production I can see no reason to change our highly Shoshone influenced cowherd.  So in that sense I guess they are the best for me.

The first picture is JAD EZRA W3128  Ezra is the largest framed bull that I’ve used for a long time.  He’s got good feet, stays sound and I was pleased with the first daughters that we calved this spring.

The 2nd picture is of JAD PAUL X158-6157  Paul is an easy moving easy breeding bull with intelligence and a sunny disposition.

The 3rd picture is of JAD PRESCORE WA743-6157  Prescore has been a dominant bull here for the last few seasons.  We have several sons of his for sale this fall.  They are stamped hard in his image.  We lost Prescore to a career ending injury this year. 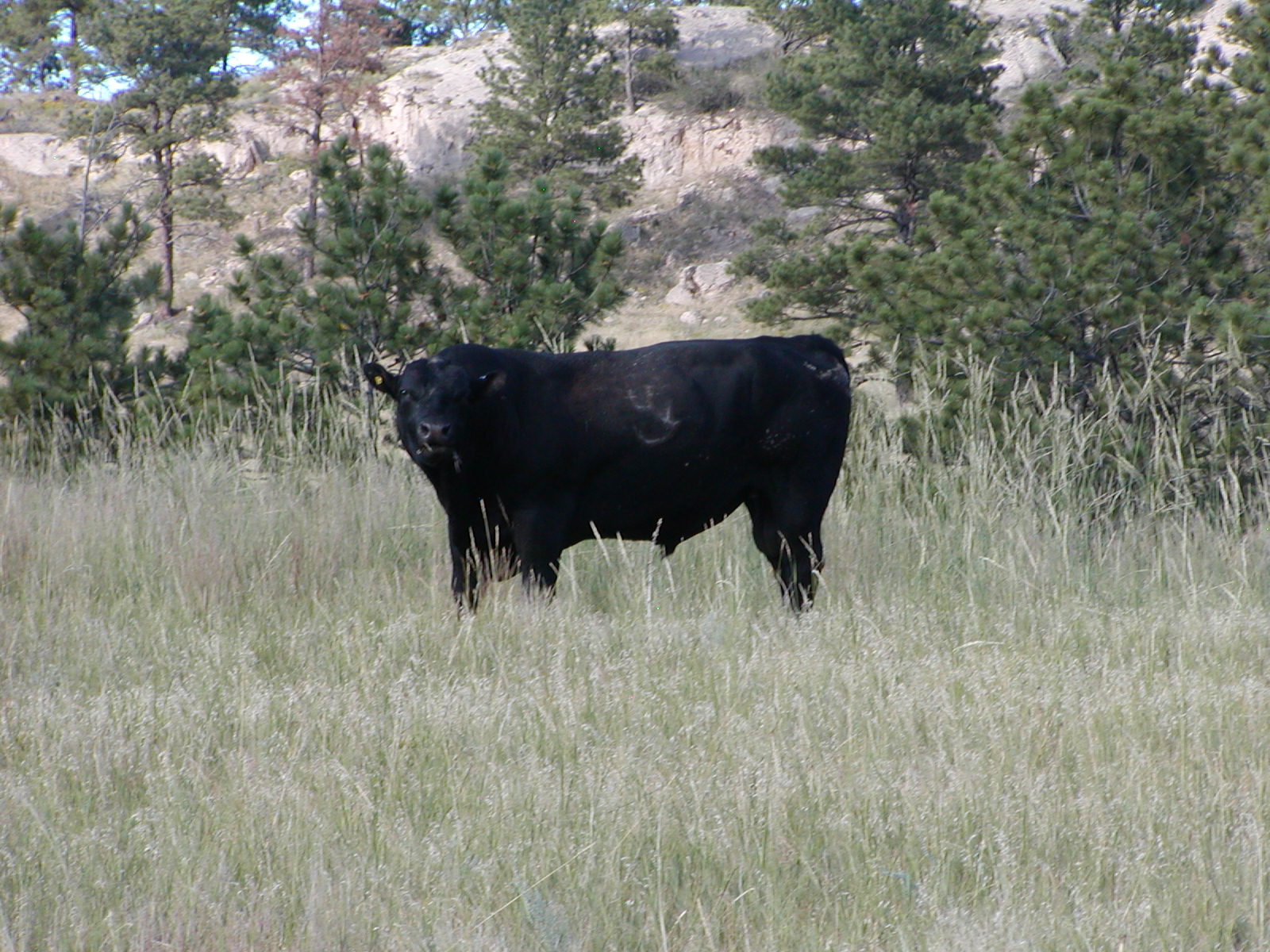 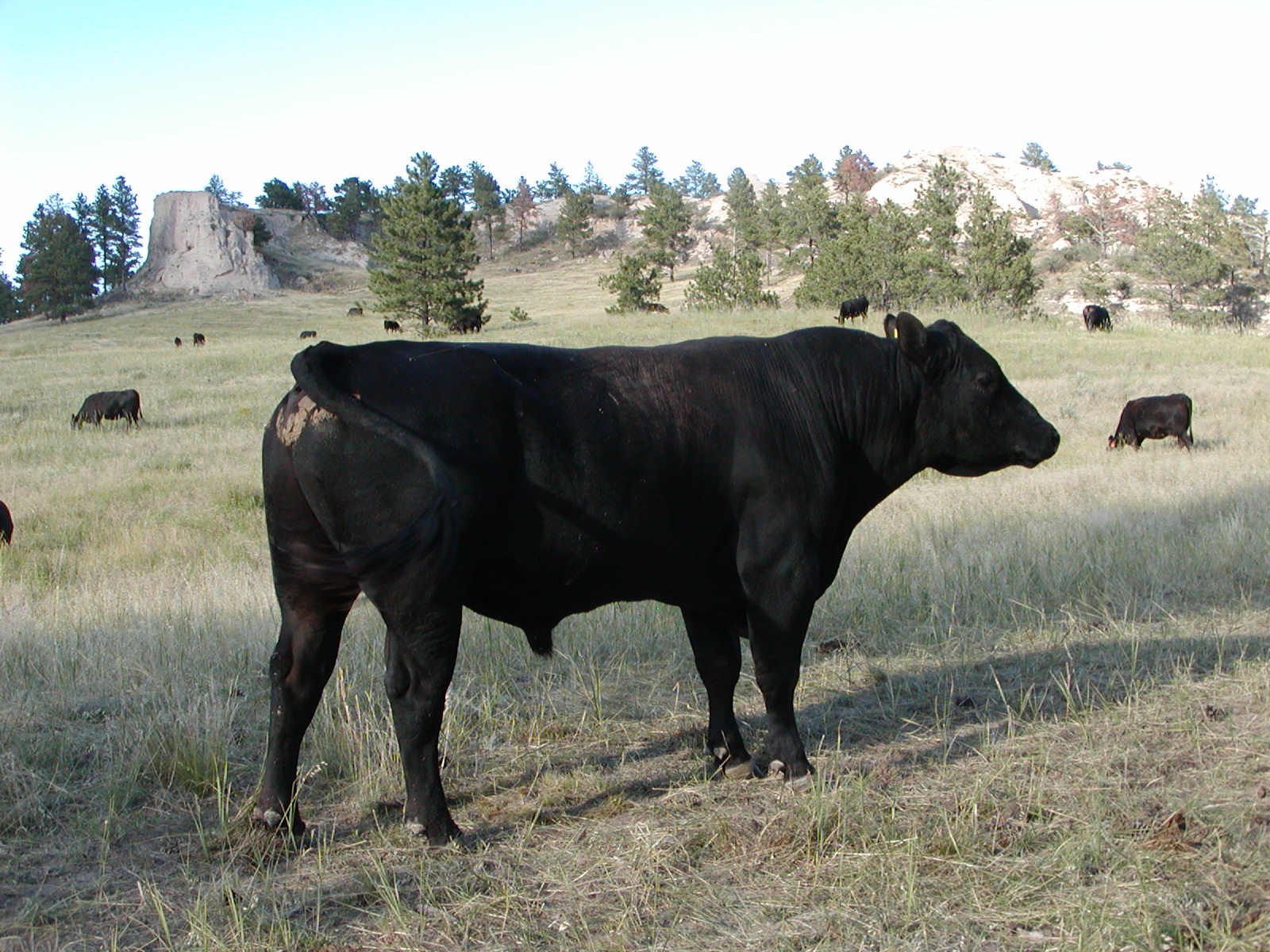 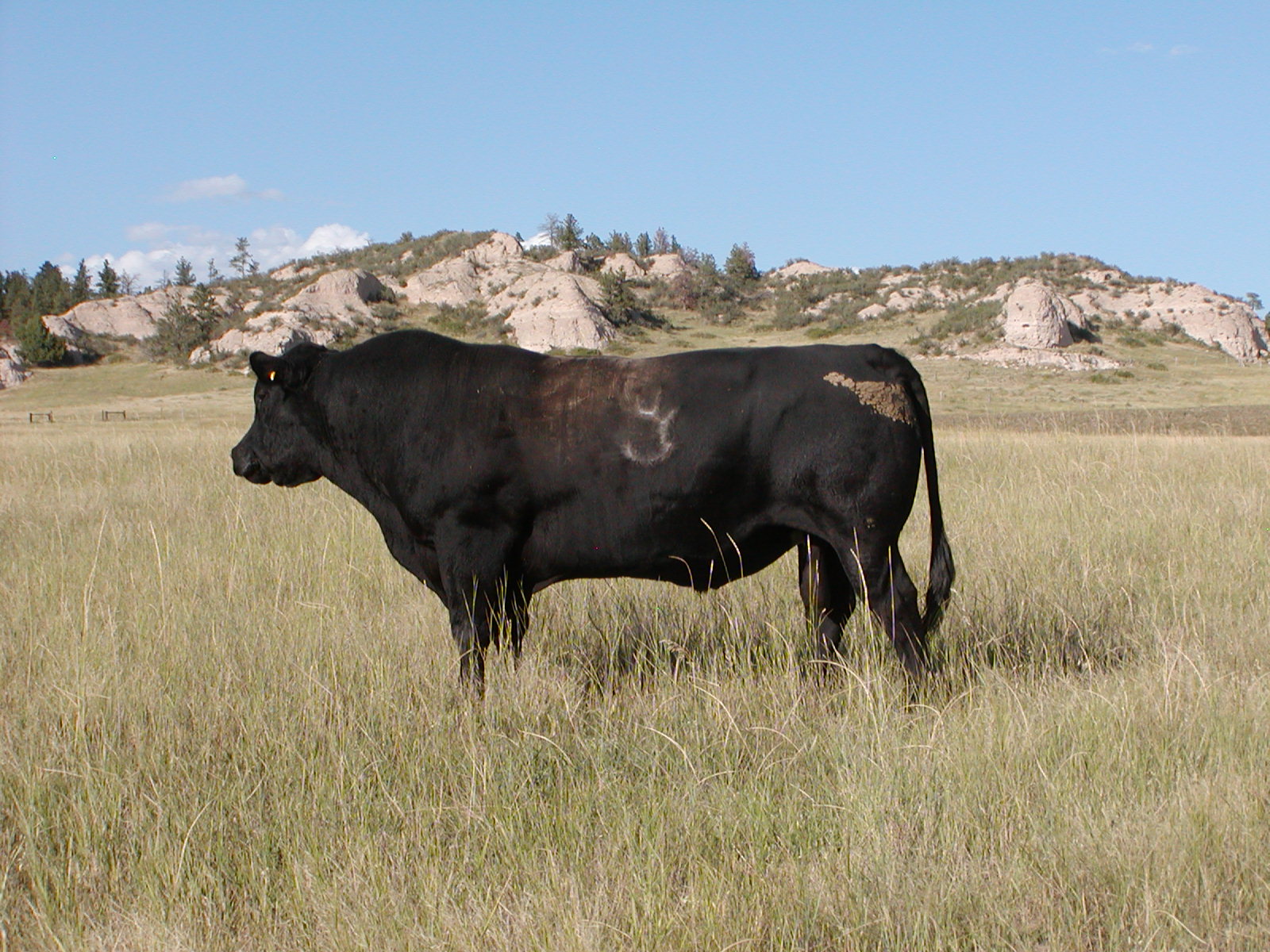 According to my highly sophisticated market research, the “Herd Bull” page is where everyone goes first when they come to the web site.  That is pretty much what I do to.  The bulls tell the story pretty quickly don’t they?

So I decided to get ours updated to more accurately portray the sires that we are currently using.  I was going to get a good picture of JAD PHOENIX U6157.  It wasn’t easy.  First he was in the tall grass. 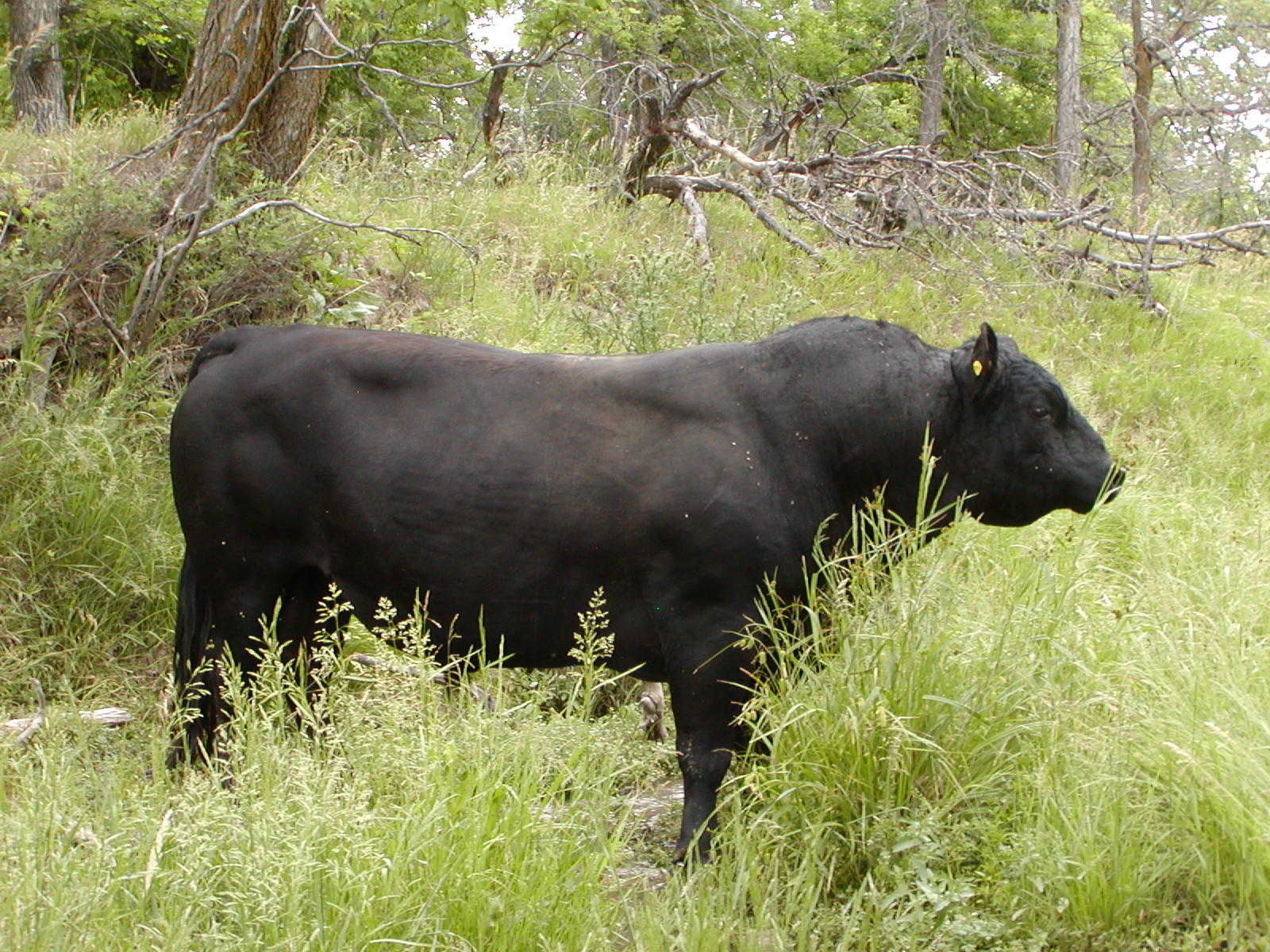 Then he went down in the water. 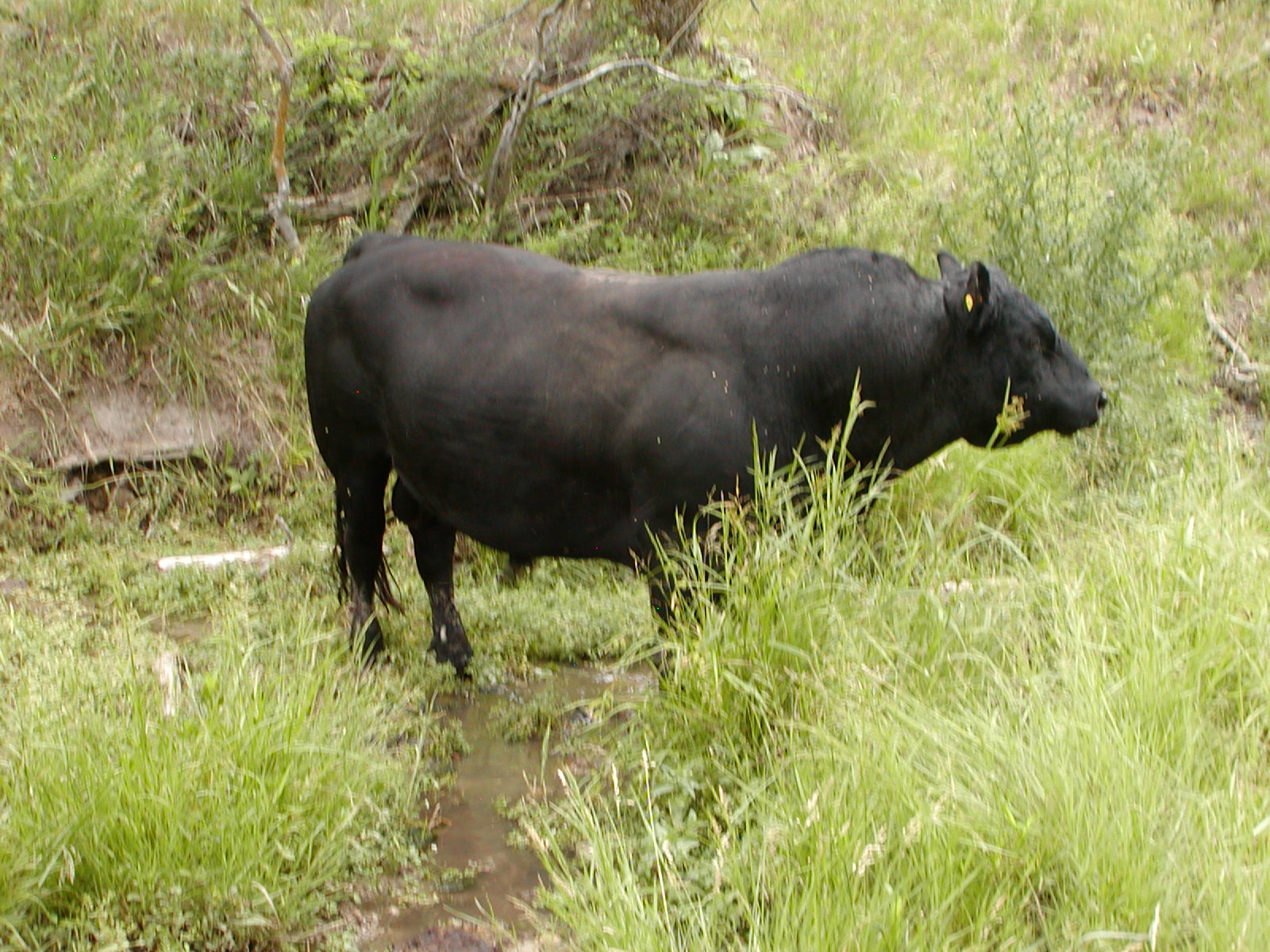 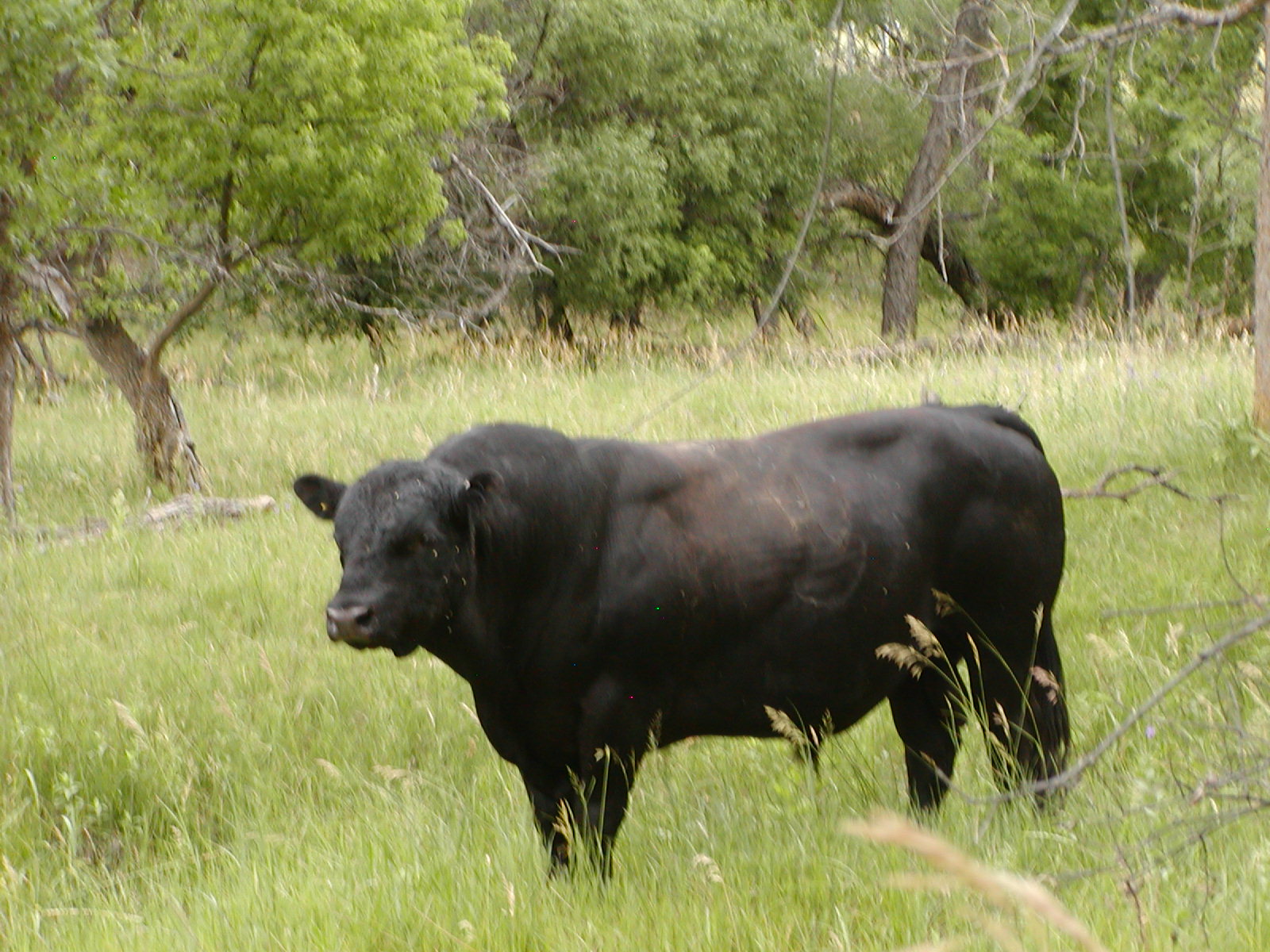 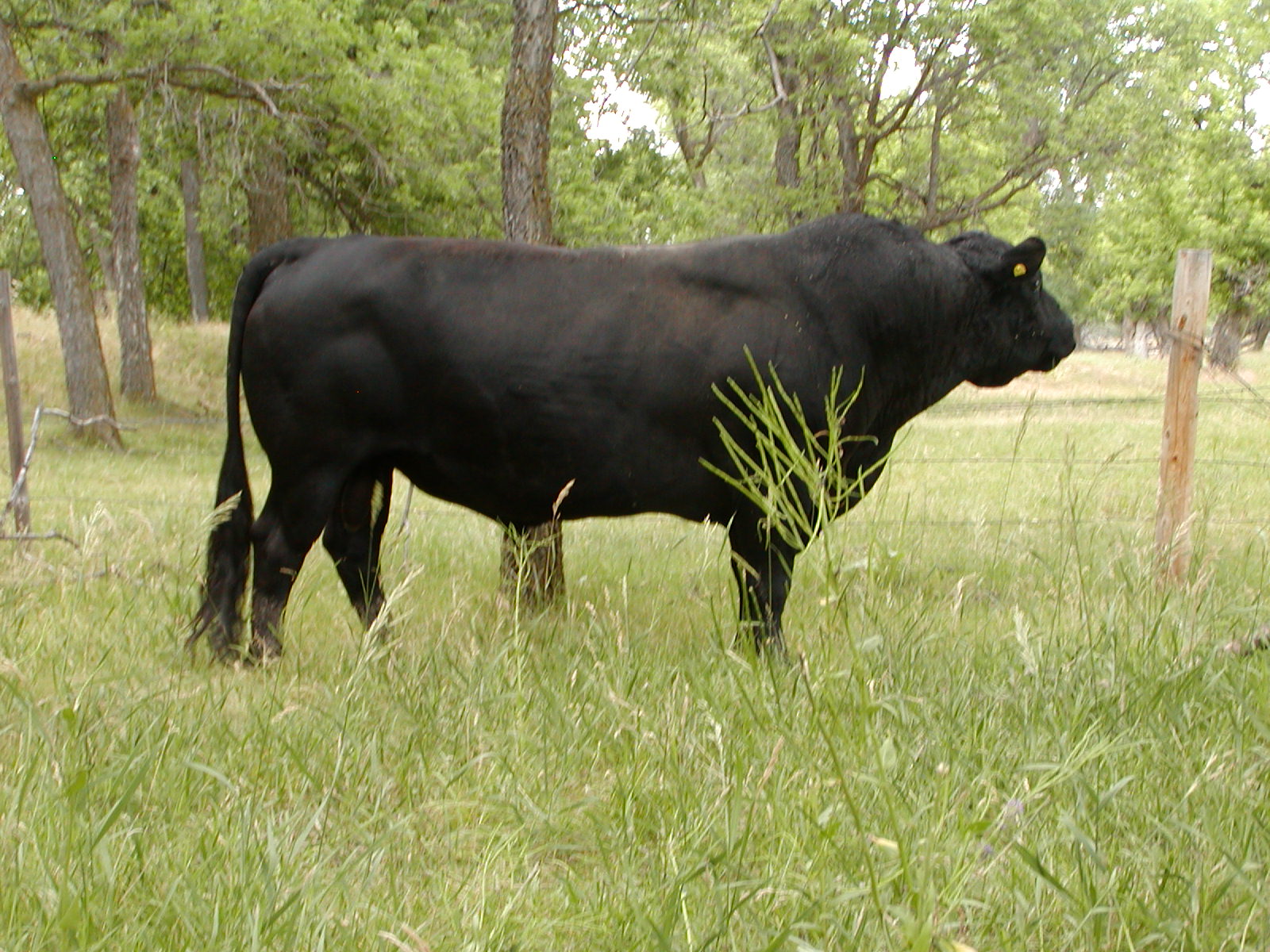 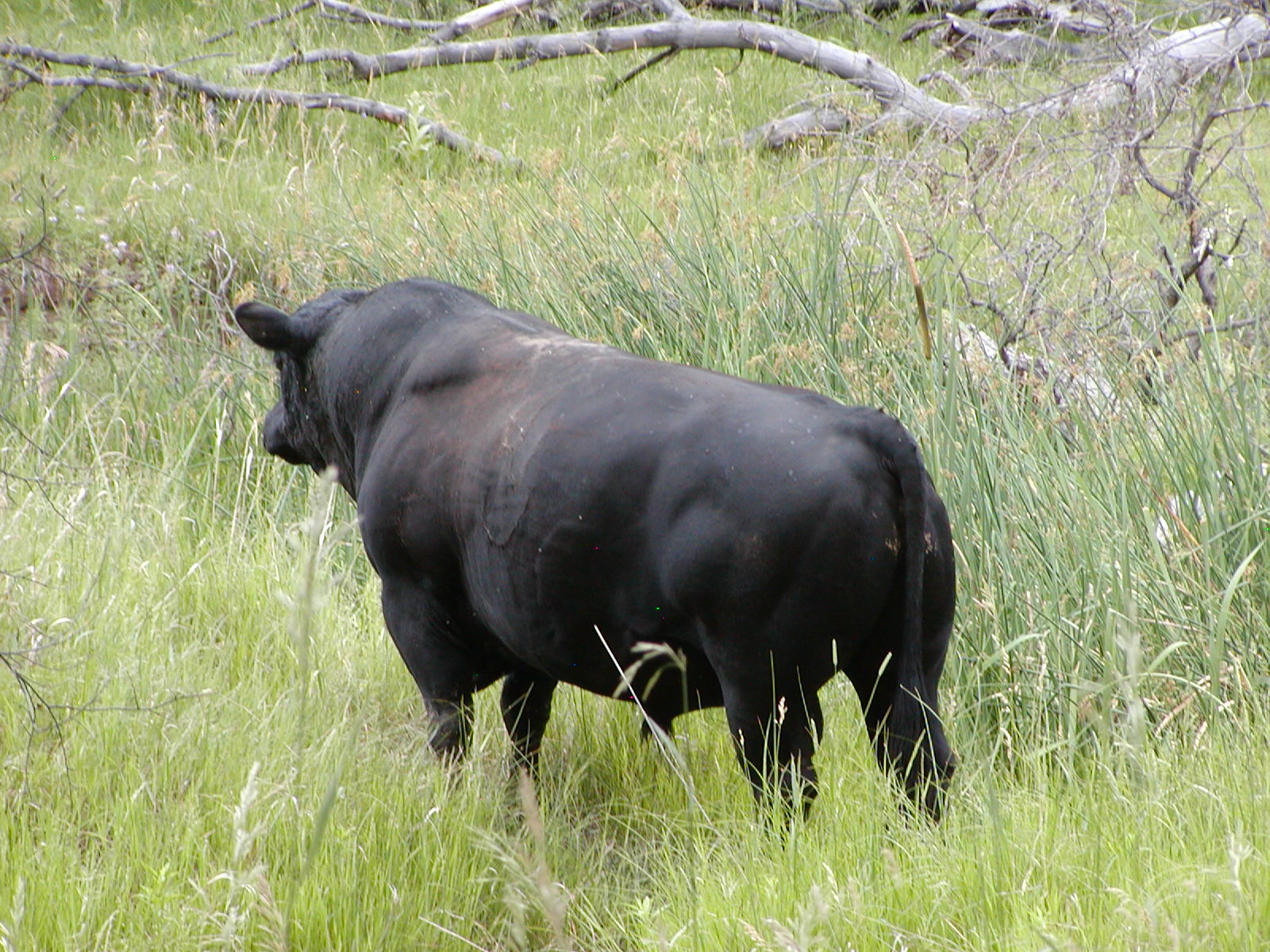 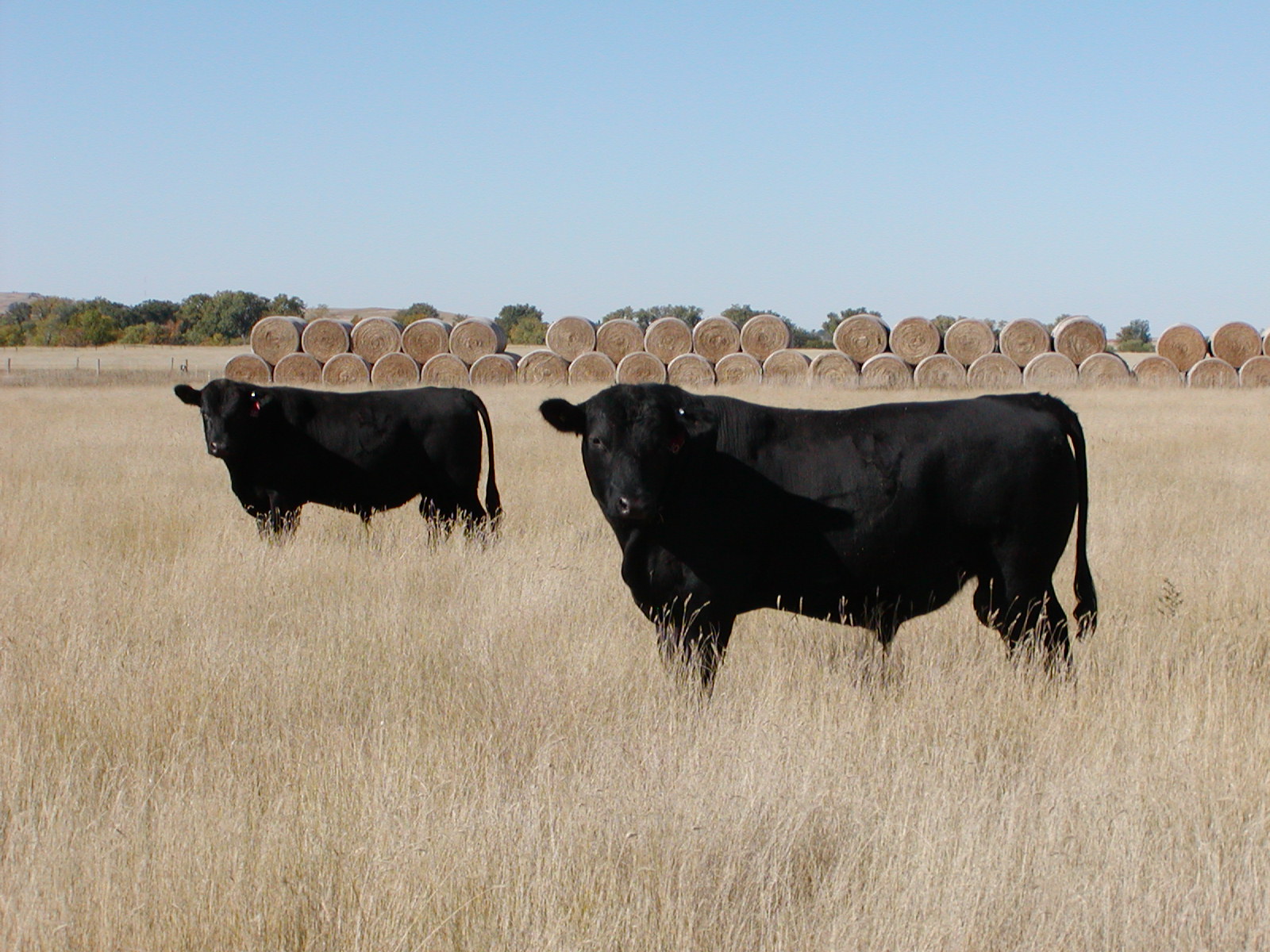 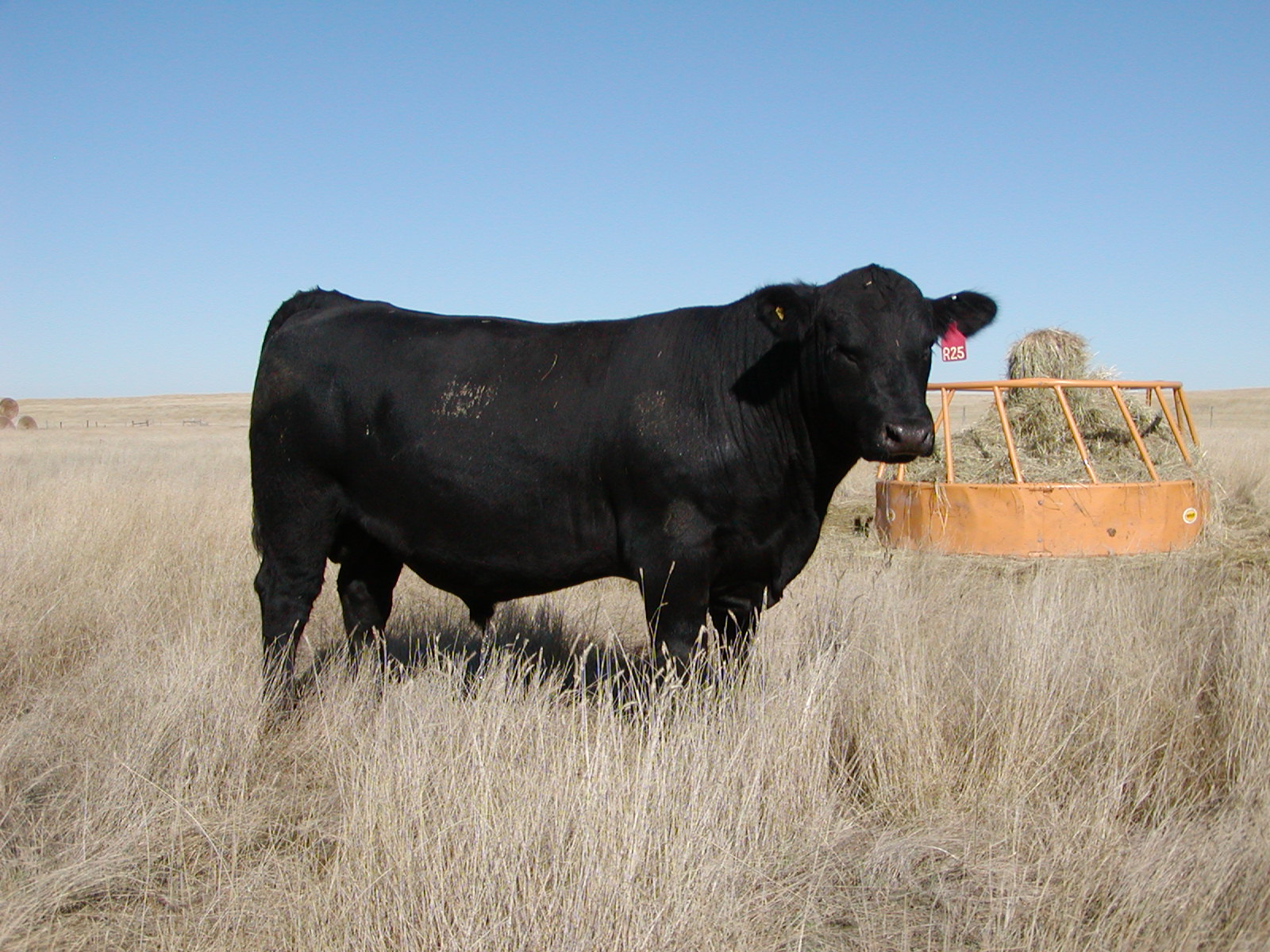 Top performer and quiet enough to eat cubes out of your hand. 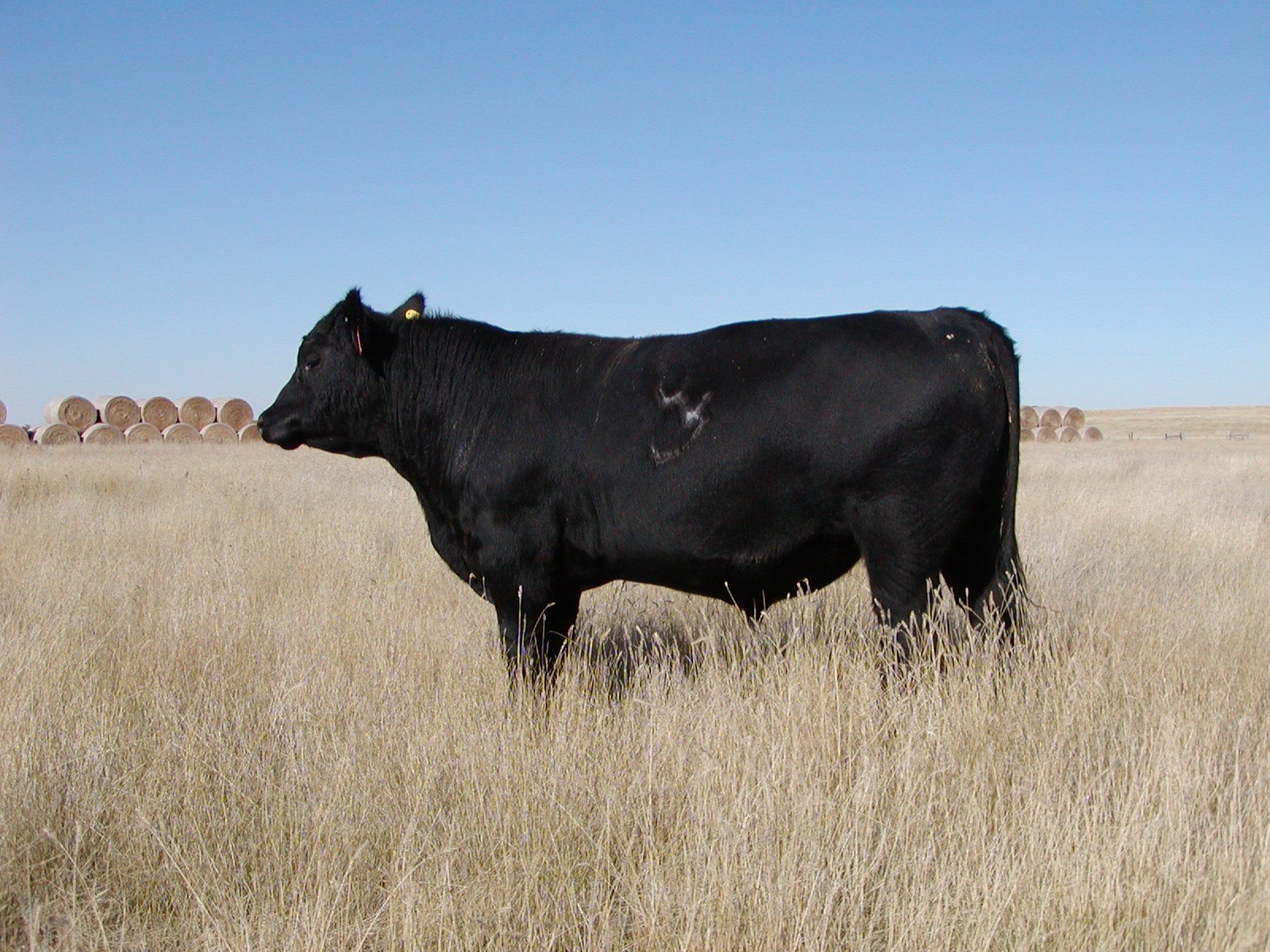 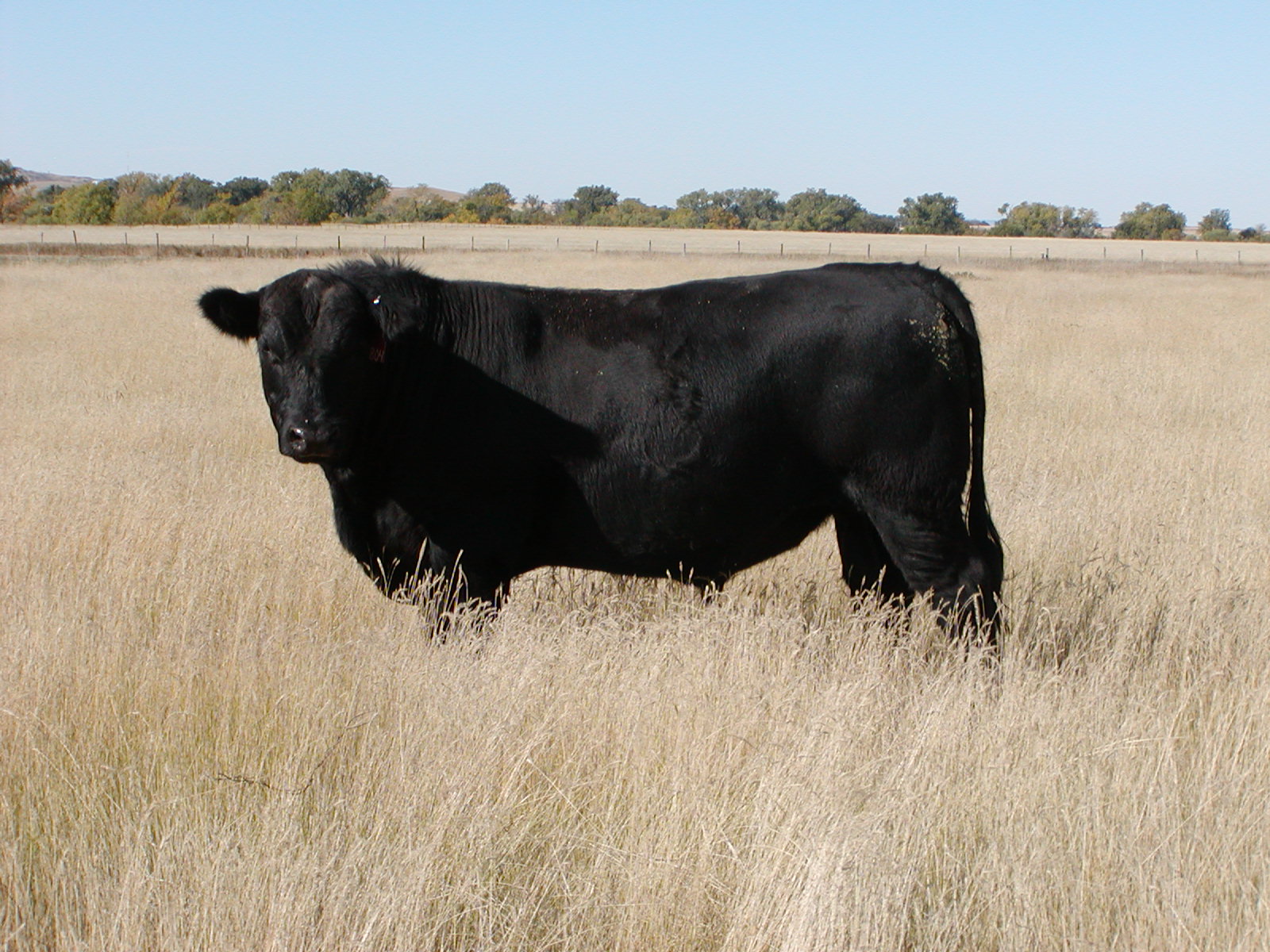 One of several outstanding sons of JAD LAD S6306 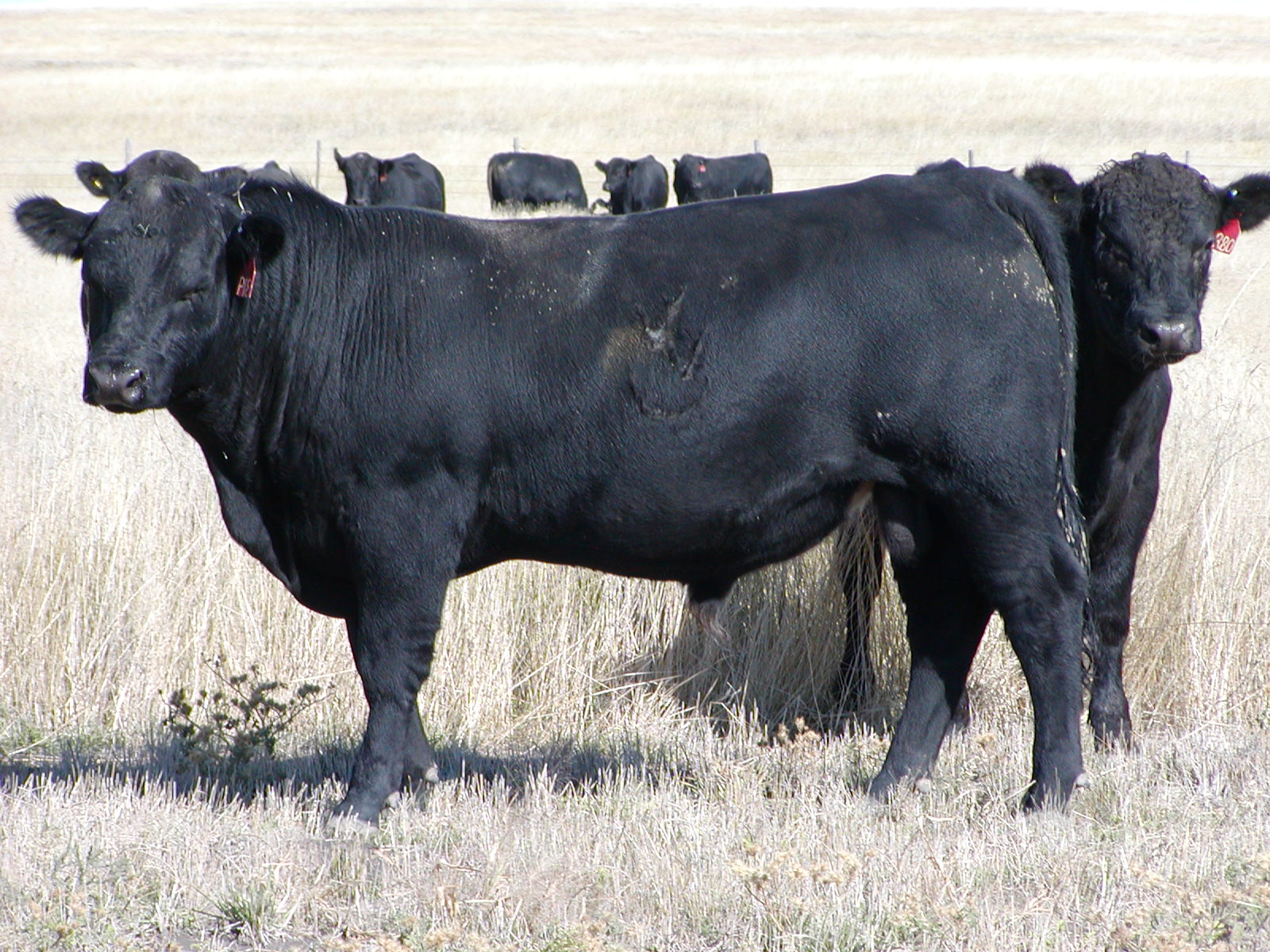 Selected on functional efficiency with emphasis on excellence in maternal characteristics. 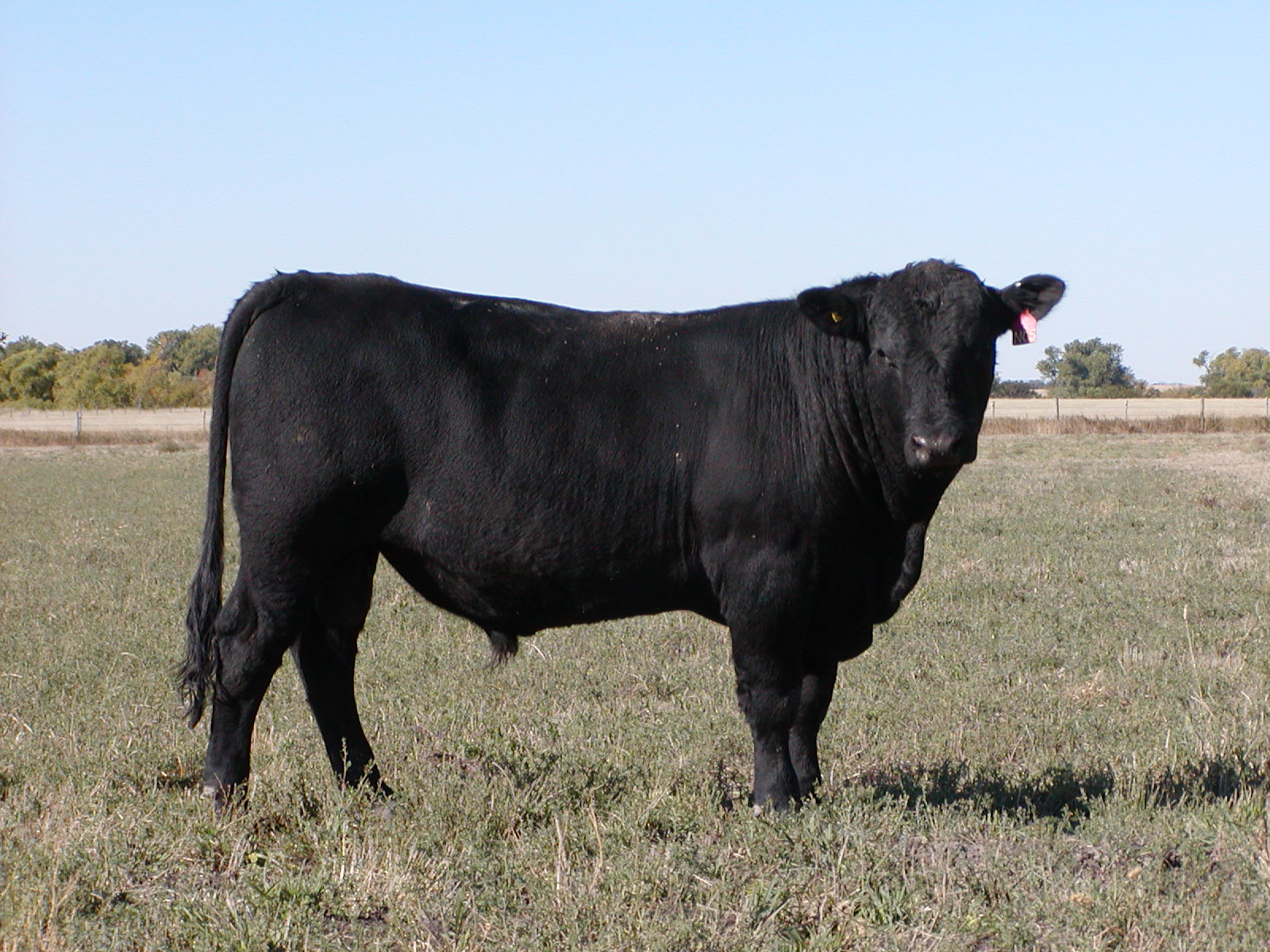 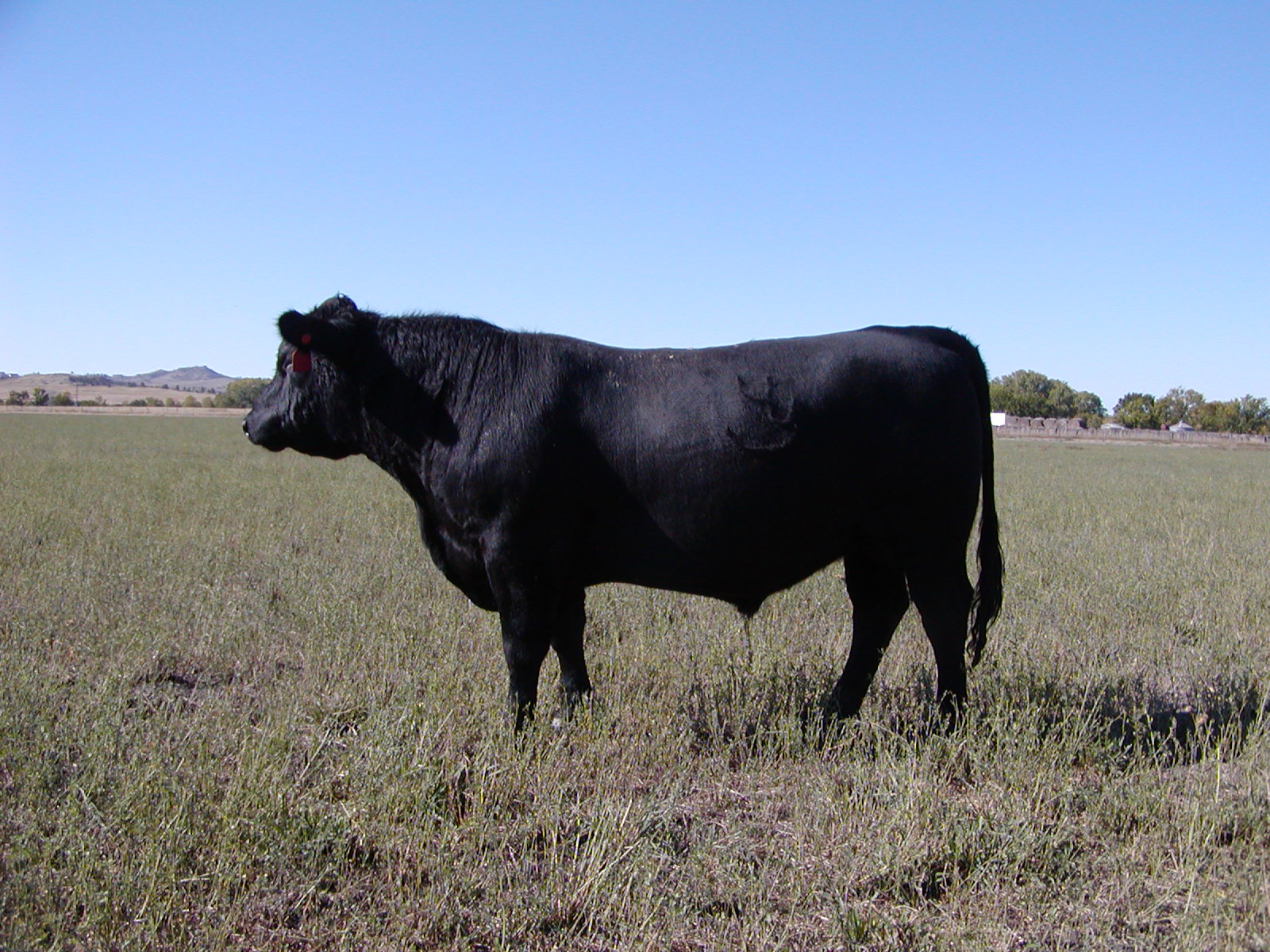 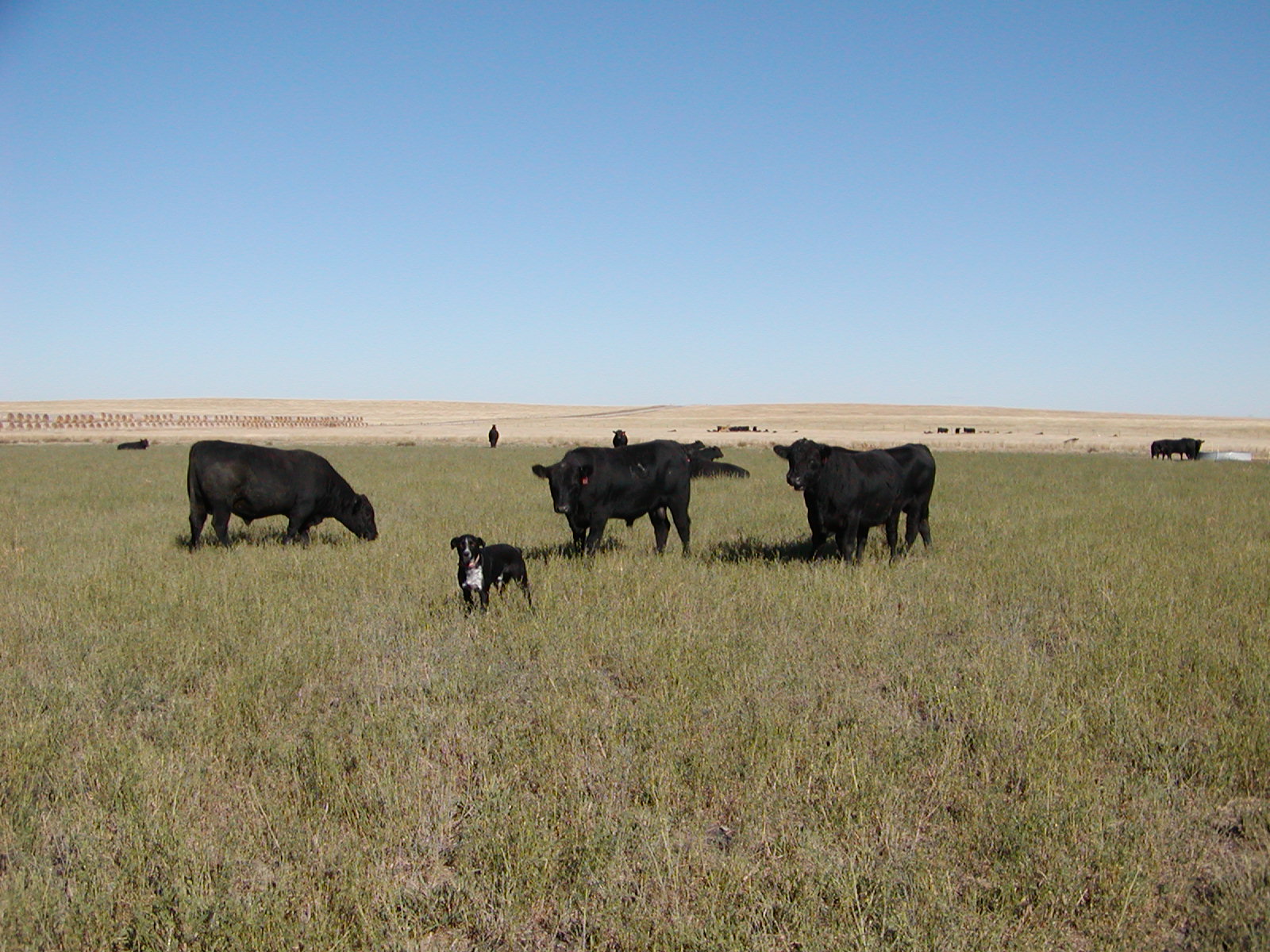 The bulls are for sale.  The dog stays. 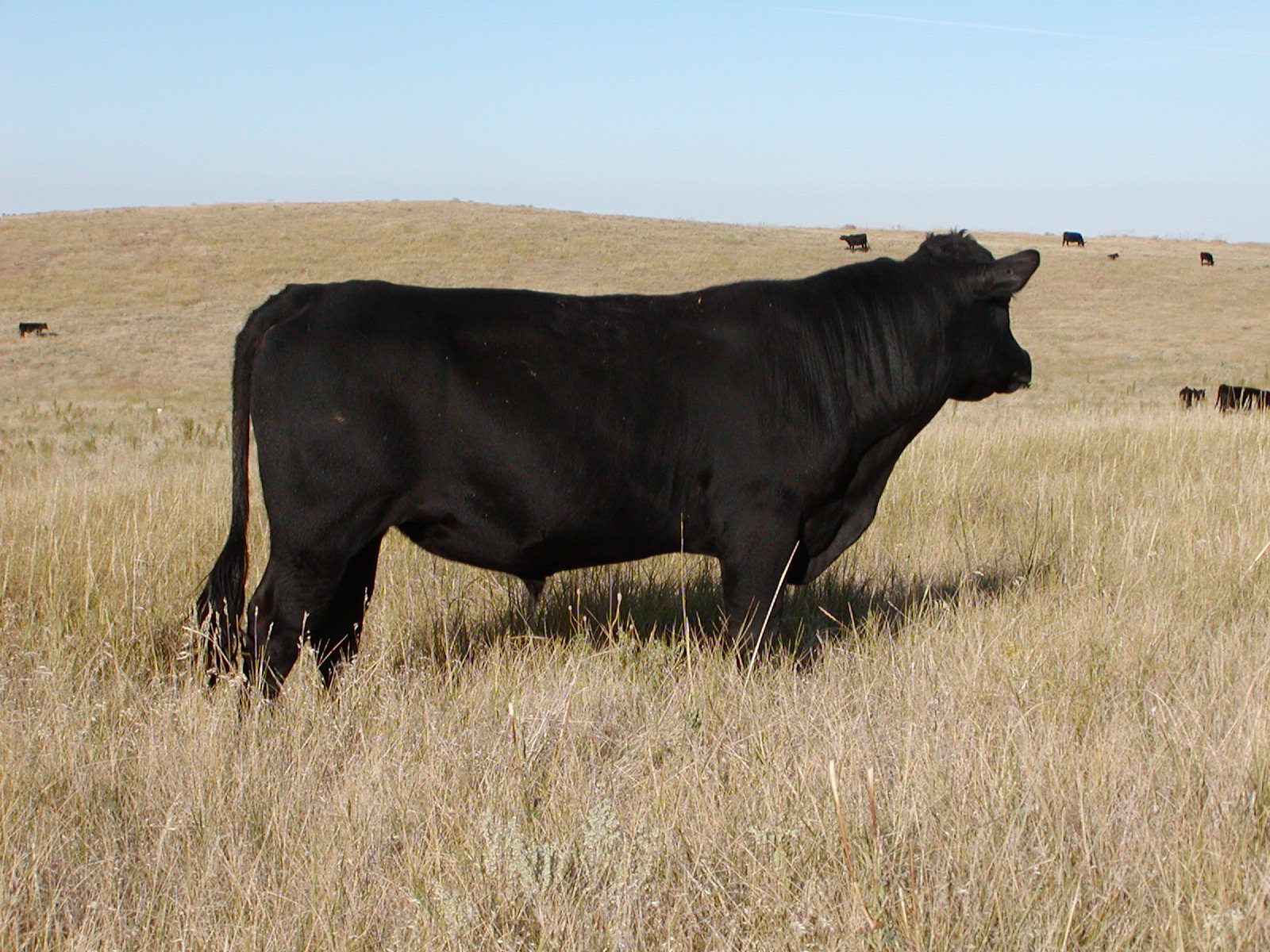 This is JAD PAULx158-6157 as a yearling that has been working about 60 days.  I could not be any happier with this bull.  The way he looks, the way he works, the way he thinks, and the way he moves suits me just fine.  He was plain as a calf, most would say he’s plain as a yearling but unless I miss my guess, he’ll be very impressive in the next picture I take.  I’ve been at this long enough that I should know better than to make bold statements about an unproven bull, but he does please me.   I pulled a little semen this spring and used him natural and A.I. 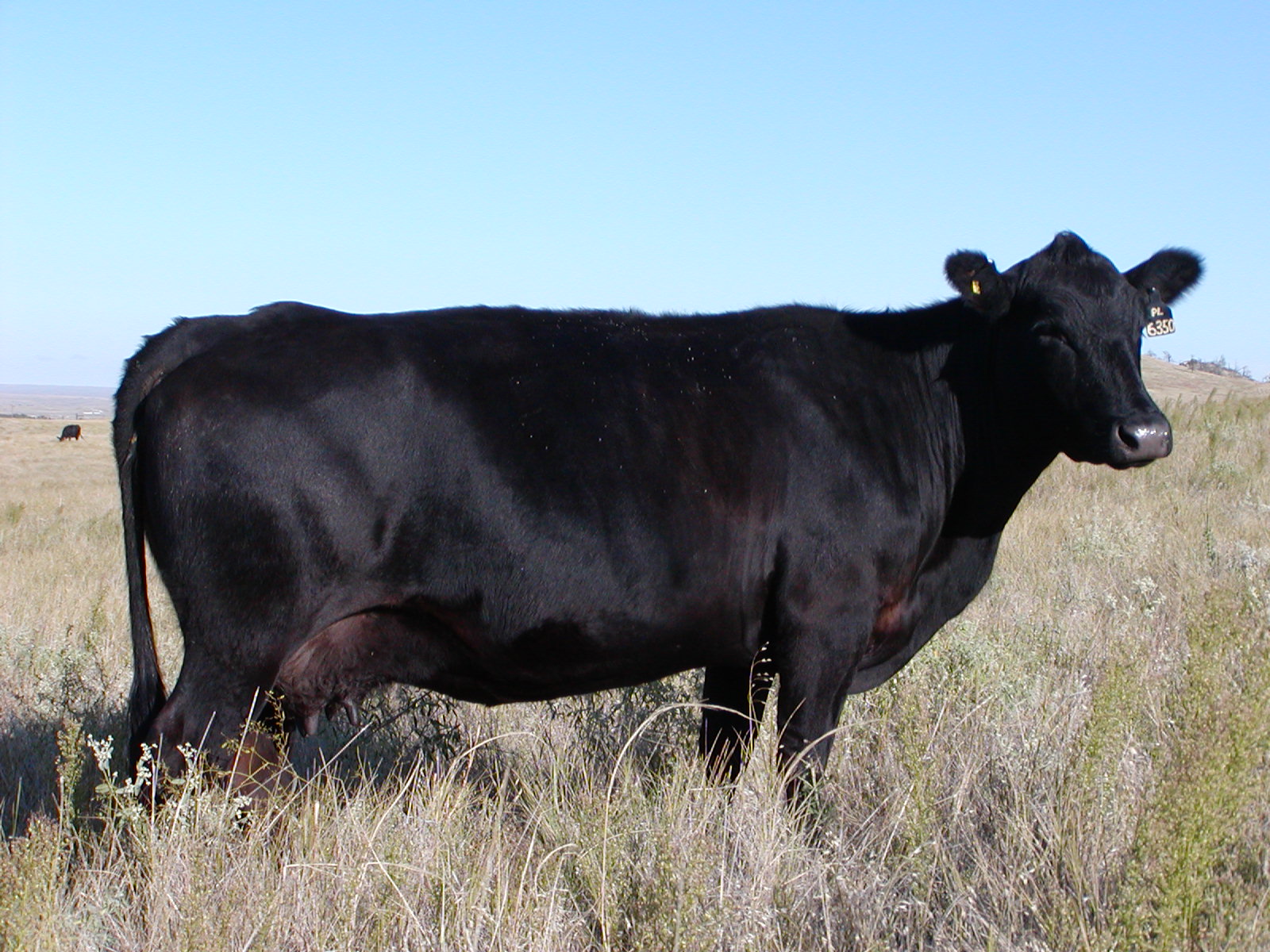 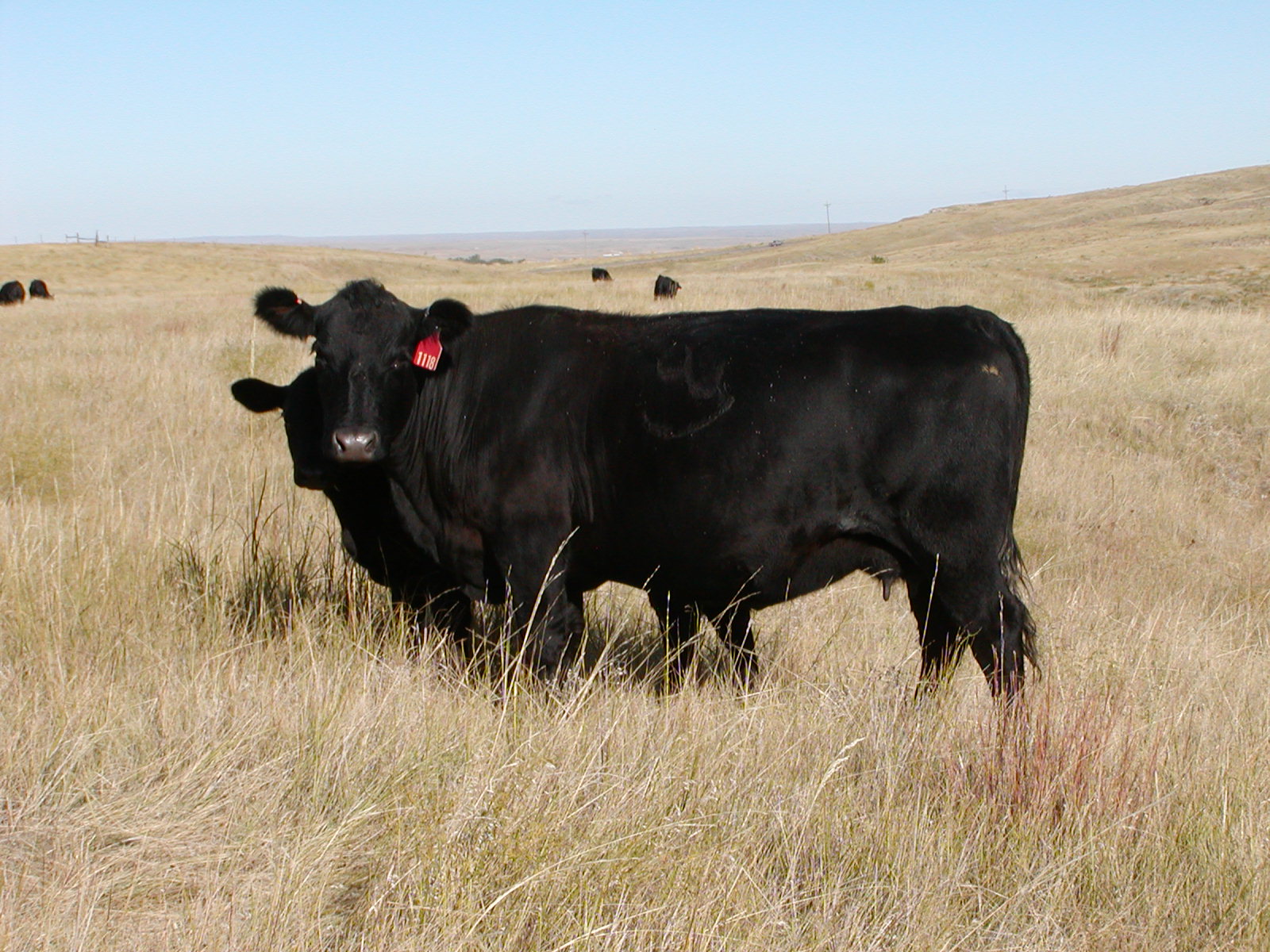 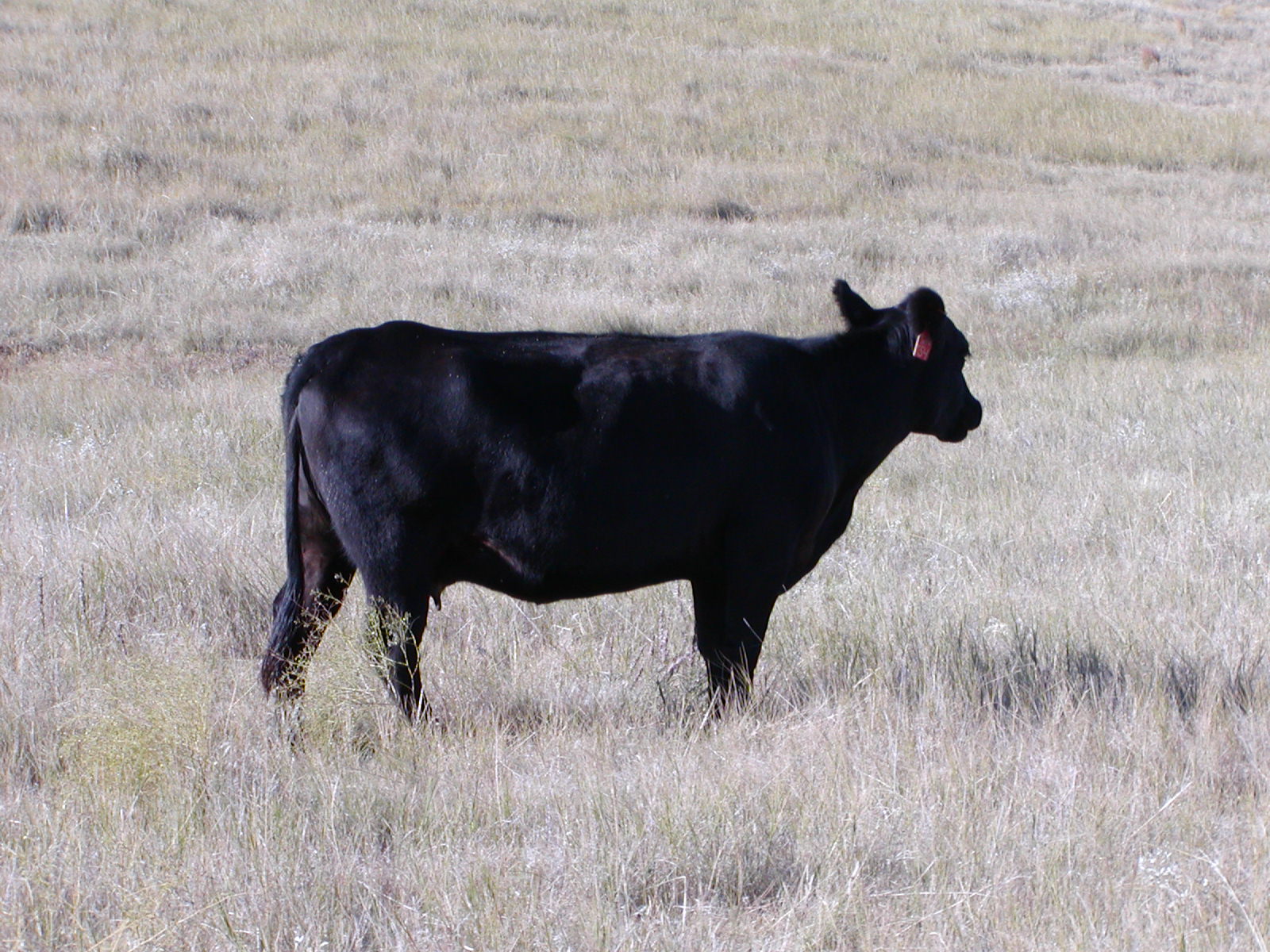 From top to bottom this is JAD FRANCES T14, JAD ANNIE 1118, andJAD FRANCES T54  I expect you’re wondering why I would even bother to picture these thin young cows in late fall.  The entire breed is moving toward more flesh on less frame.  Most of the pictures in most of the ads show big-bellied bulls with fat butts and hips pointed to the sky and their female counterparts with short necks, and fat briskets pointing to the ground.  I’ve been there and I sure prefer these kind of cows.  They milk down a little and show a little back bone this time of year.  They’re feminine/fertile.  They’re built to walk and as I get a little older, I sure understand the advantage of less weight on a frame for longevity. 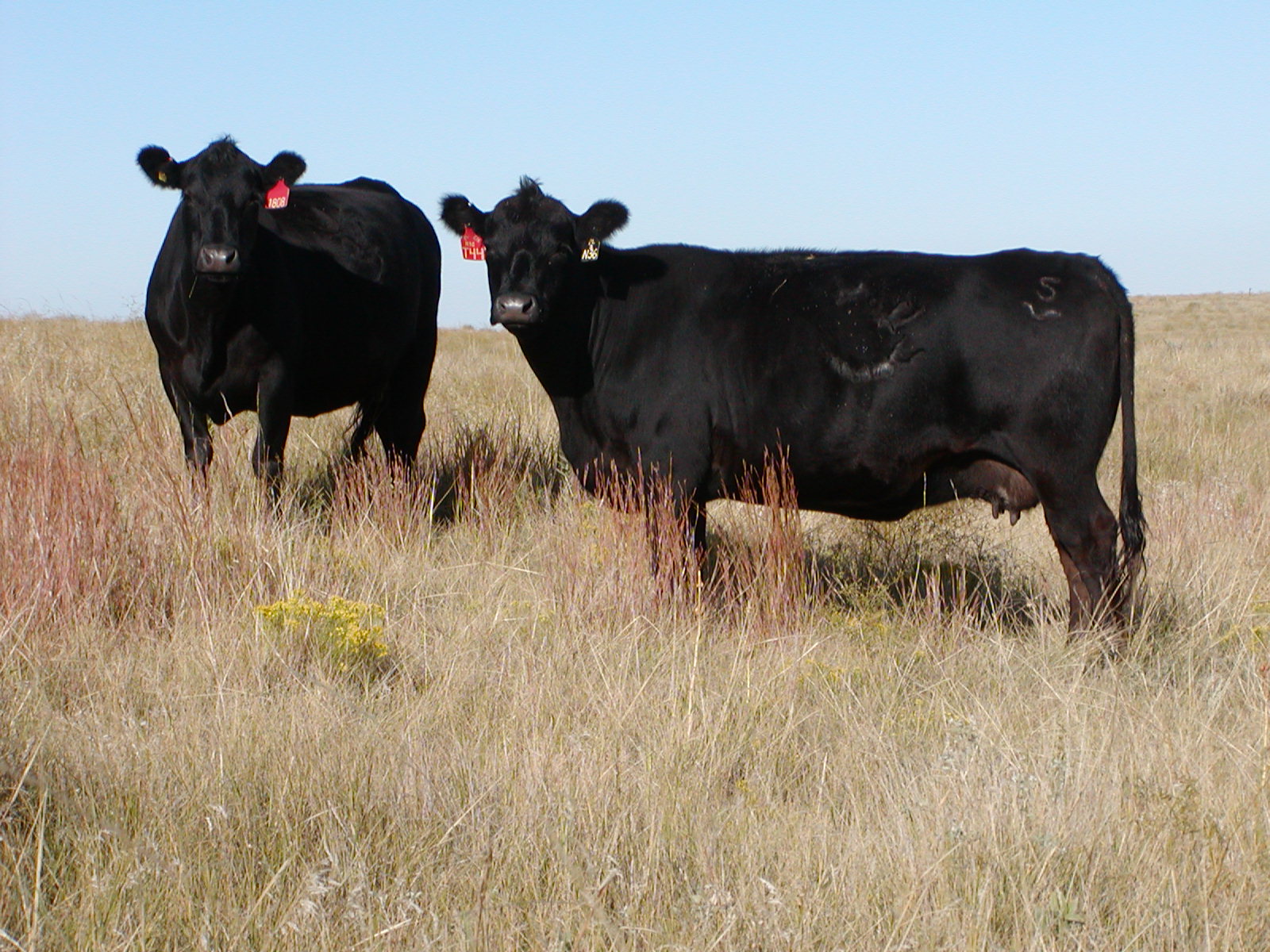 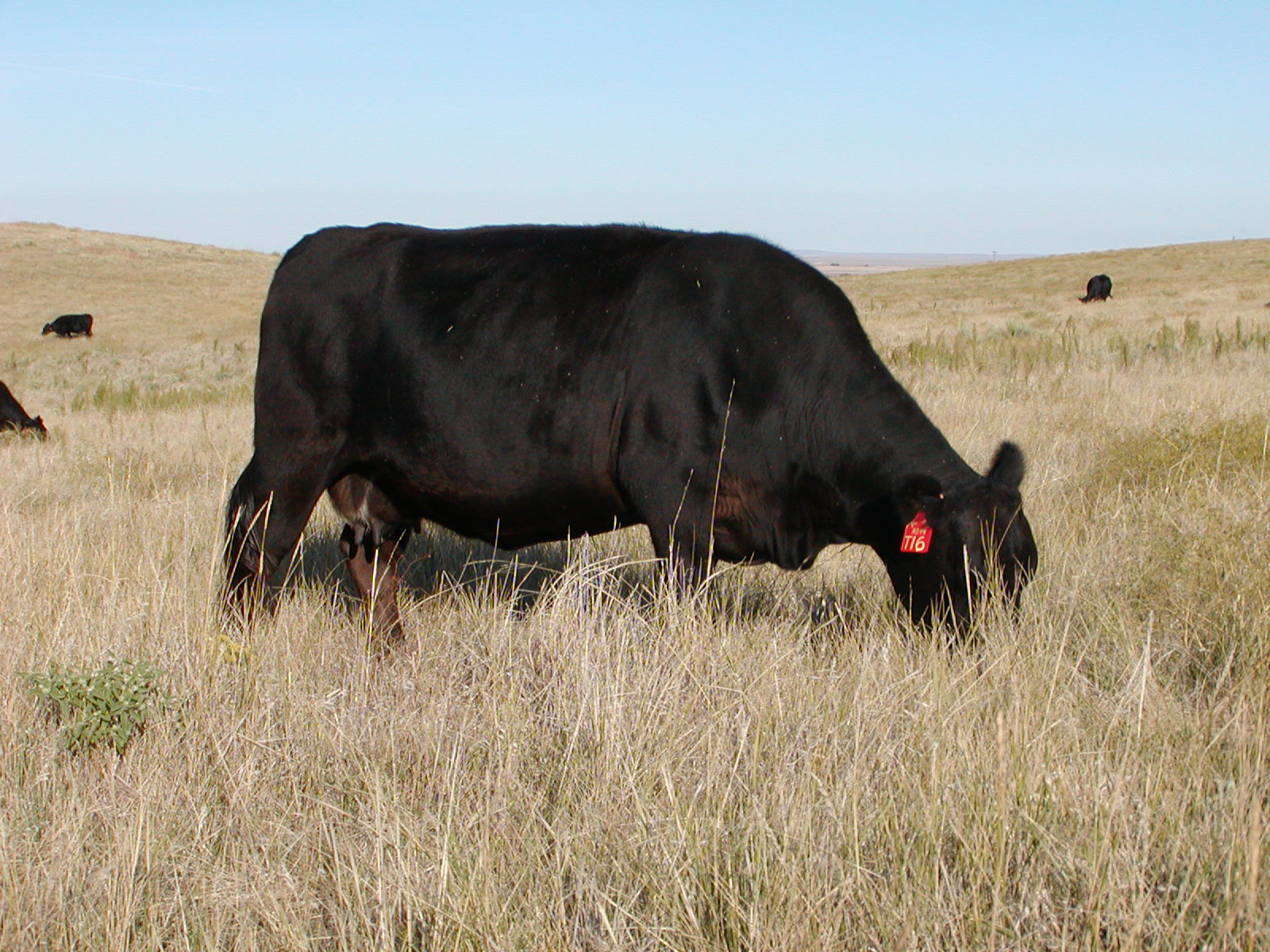 The cow broadside in the foreground (top picture) is a four year old Prudent Lad daughter.  The cow in the background is JAD ANNIE 1808 she is a maternal sister to JAD ABILENE XS40  he is a nice bull that we’ll sell this fall.  The cow in the bottom picture is JAD ERICA T16 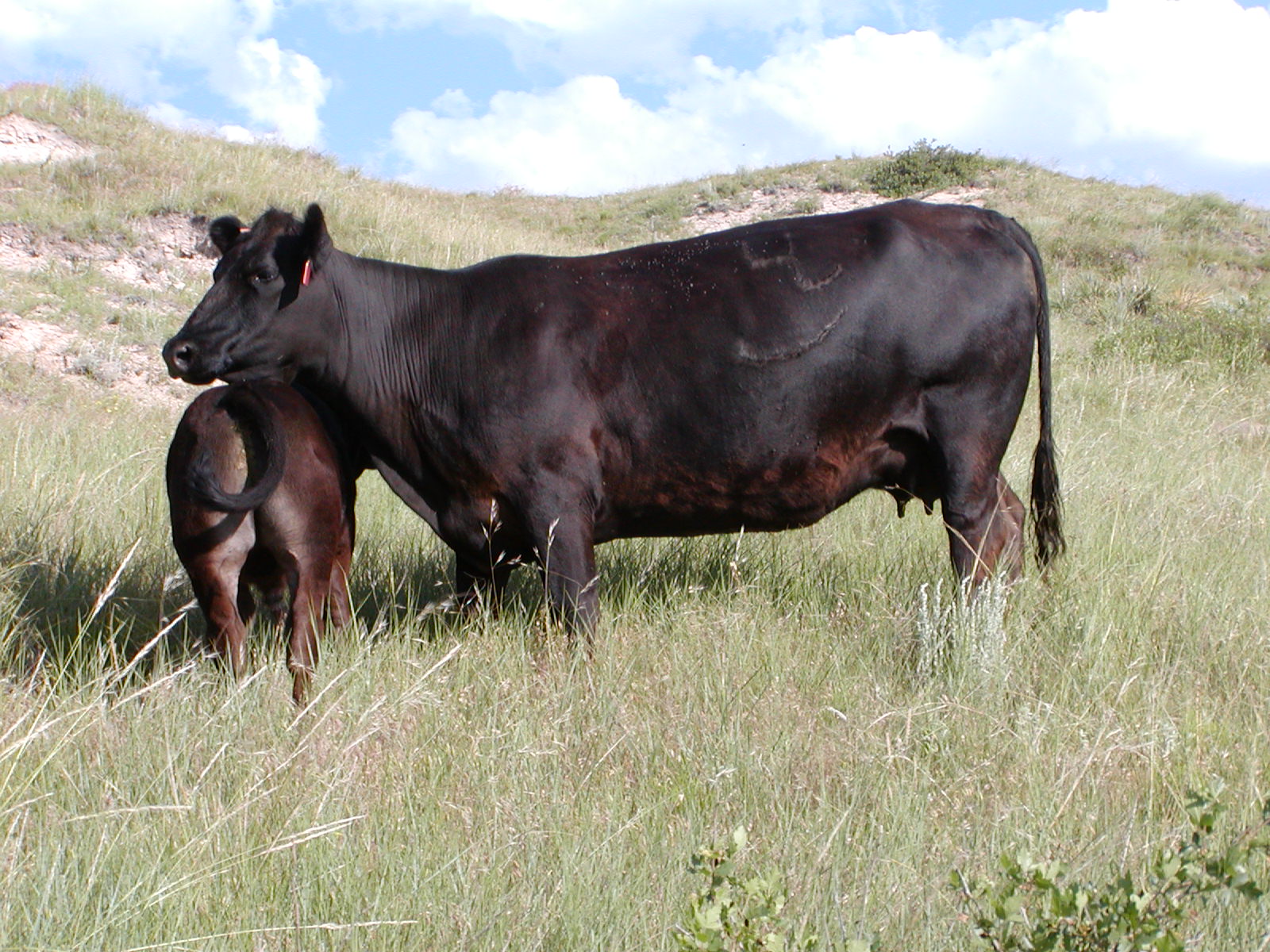 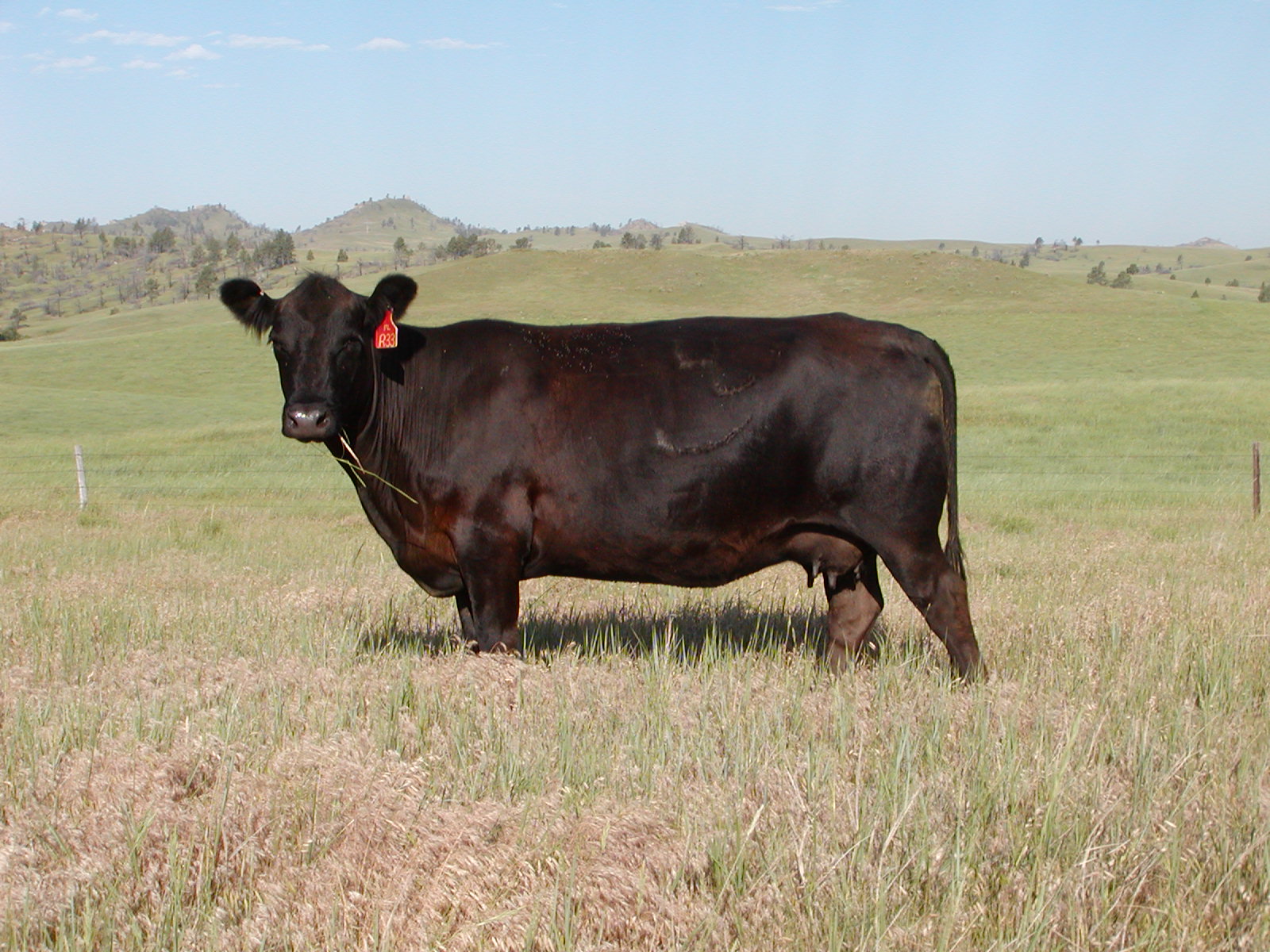 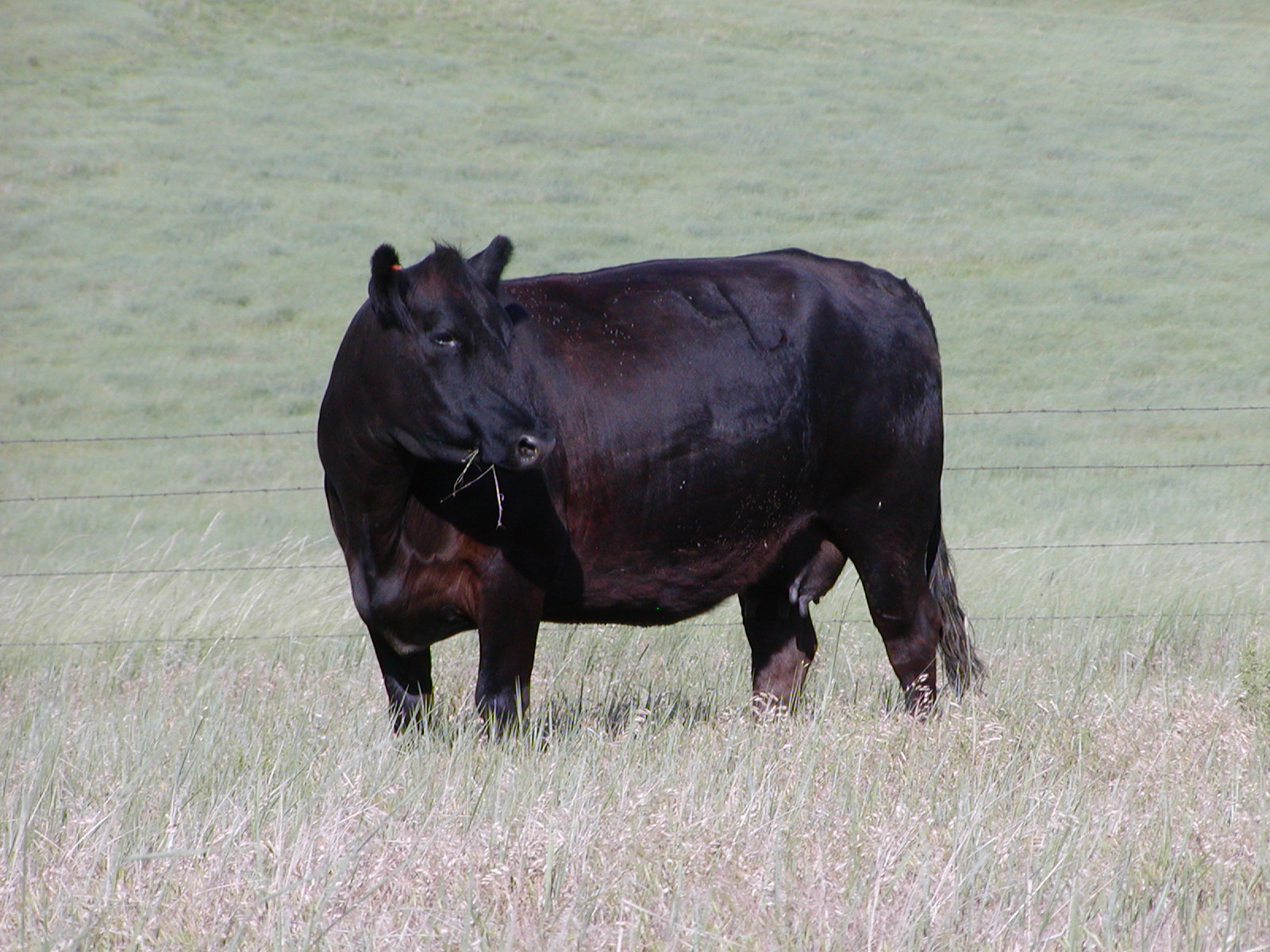 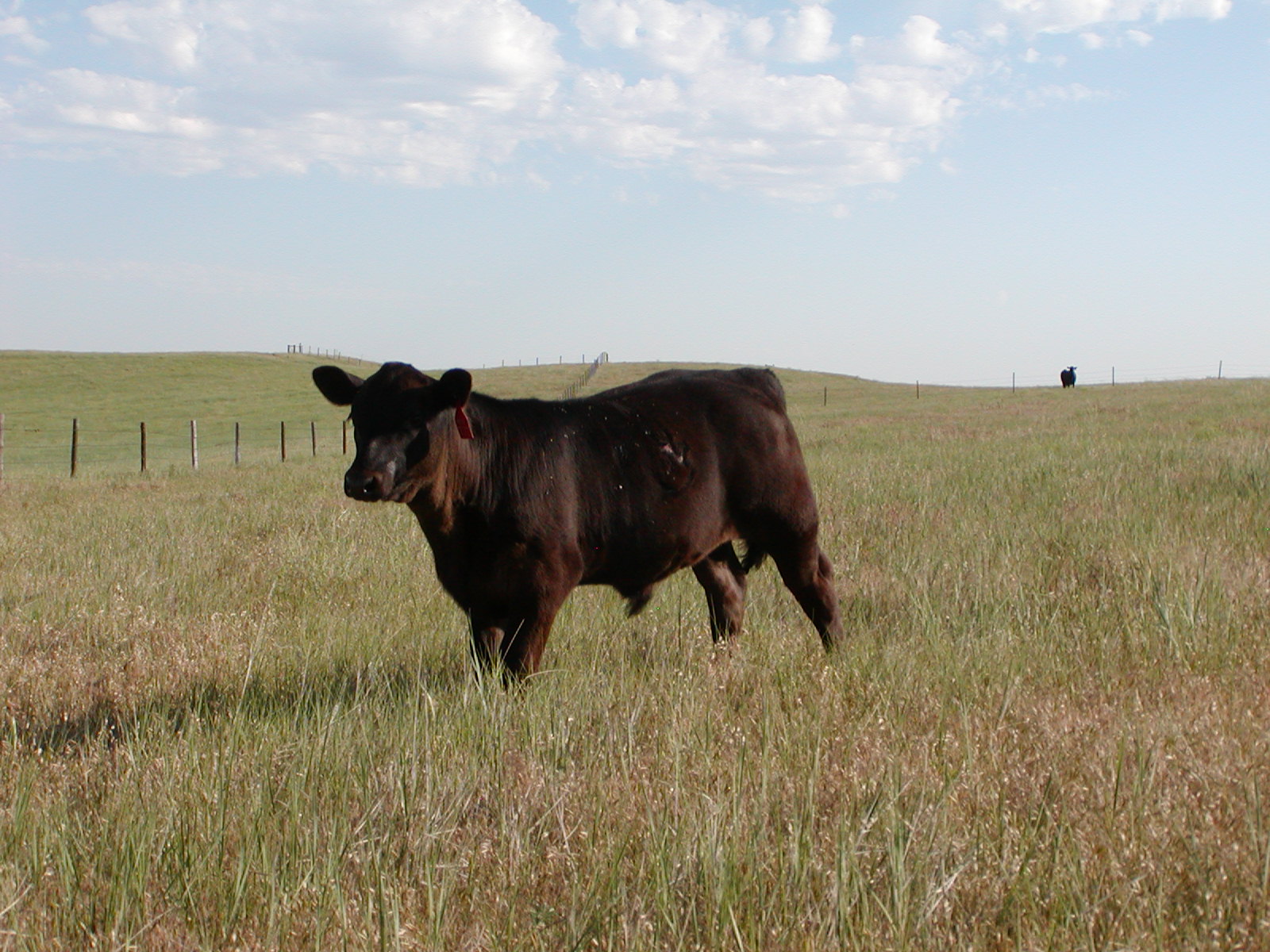 JAD PRUDENT LAD 6157 was the calf that Shoshone Prudence 6157 was carrying when she came here in December of 2003.  We have used him heavily and several of his sons and now grandsons making him the dominate bull in the ancestry of most of our young stock.  I want to display several of his daughters so that you can get an idea of the type that he is siring as well as his prepotency.  I’m not trying to promote Prudent Lad.  He is deceased and there is no semen available for sale and it’s really not his genetics specifically that I’m concentrating.  What I’m promoting is the type of many of his daughters and the reasonable expectation that his grandsons will sire daughters cut from the same mold.   The above pictures are of JAD LUCY T72 and her bull calf JAD LUXOR YT72.  What I hope you’ll see and appreciate, is her overall femininity.  There is a softness throughout in these cows.  In their eyes in their hair coats in their skeletal design they are soft like a white tail doe.  Look at her neck her hip her shoulder her rib all indicators of femininity.  You can’t tell it from the picture but she is always looking in the direction of her calf.  She is soft in her demeanor also, kind, gentle, nurturing.  She is the essence of maternal.  Does it matter?  Does it contribute to ranch profitability?   Is it highly heritable?  I guess everyone has to answer these questions for themselves.  I will tell you that I like it and I like range calving cows with these characteristics.  I’ll try to get some PL daughters pictured and posted in the near future.

I’ve done some recreational shopping over the last year.  Some of it may have been more like impulse buying but at any rate we’ve acquired some new animals and I wanted to show them all to you.  This is MISS FOREVER 67 GFAR.  She has a heifer calf by LODGE OF VOLGA 0816.  She was purchased from Gary Funk.  She is a very gentle cow with an excellent udder.  She is a half sister to Shoshone Ballard 628 GFAR owned by Gary Funk and Travis Krein.  I like the cow and it’s going to be fun to see how she contributes here. 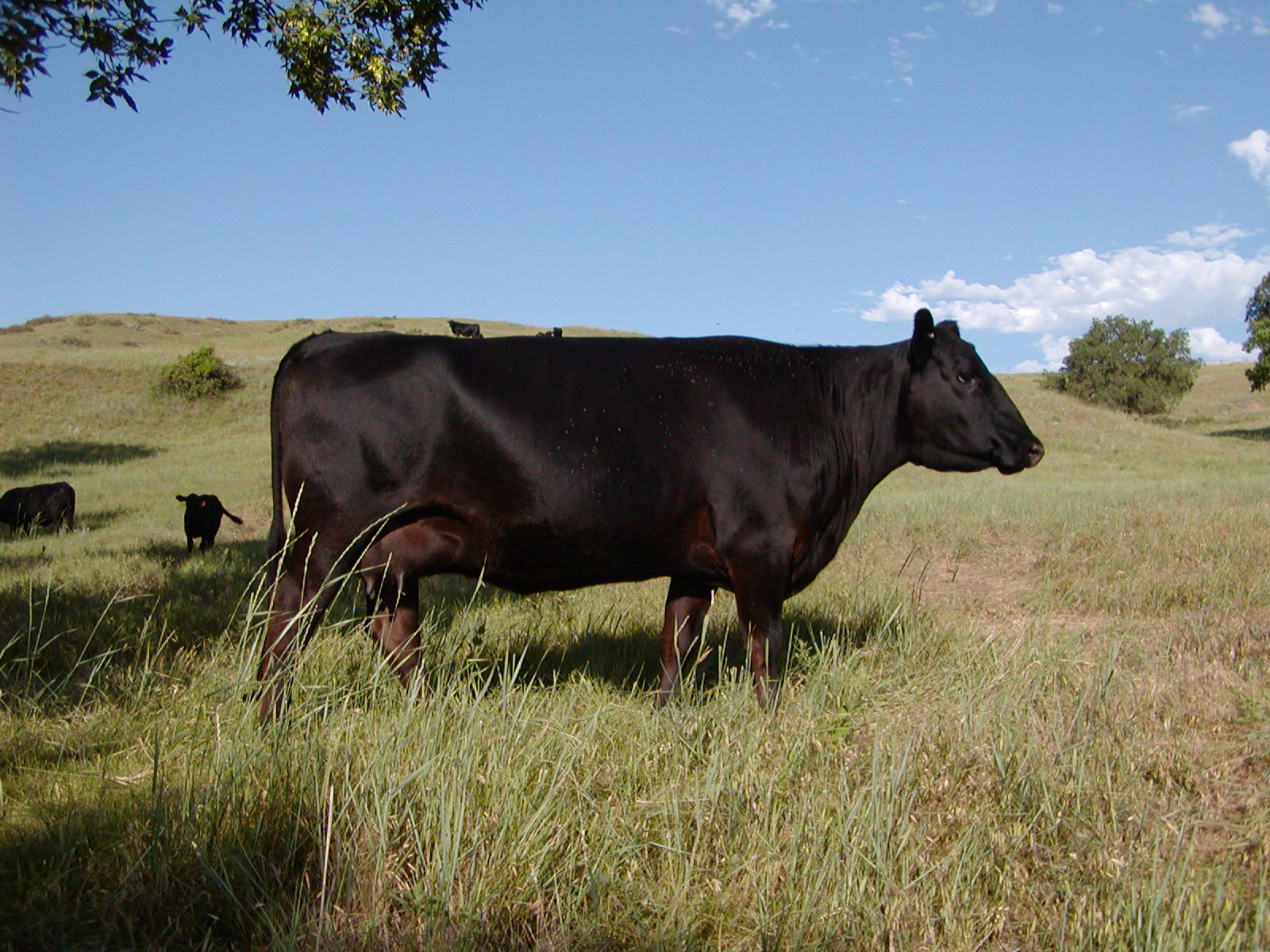