Dockweiler Angus is owned and operated by John, Ann, and Cole Dockweiler.  We are located in the North West corner of Nebraska in the beautiful pine ridge area.  The Big and Little Bordeaux creeks run through the ranch on their way to the White River.  Pine tree covered rock buttes overlook open grasslands and meadows.  Wildlife is plentiful in this area, including elk, deer, antelope, turkey, pheasant, and more. 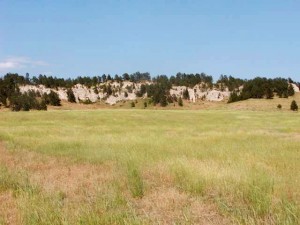 “The more steel and petroleum we put between the sun and a cow’s belly, the less profitable we will be” -Jim Gerrish

The above quote sums up our production philosophy.  We strive to be truly low input in every phase of production.  We calve in June which allows our cows to graze year round.  Our heifers and cows calve together in large pastures.  We check on them once or twice a day.  JAD cows and heifers are expected to be able to calve and mother on their own.  Heifer and bull calves are developed after weaning on winter range with alfalfa hay for a protein supplement.  Our sale bulls are developed entirely on forage.  This production model sorts cattle for us.  Good cattle thrive here, but if there are any issues with structure, fitness, endocrine balance, or inteligence, they show up quickly and cull themselves.

That leads me to the second quote that sums up our genetic selection philosophy:

I have been breeding Angus cattle for 18 years now, and one of the really great things about being a breeder is that, becaue of A.I. and identification, you are more quickly made aware of the results of selection.  I started out breeding curve benders and was disappointed by the lack of consistancy and overall quality.  I then moved to maternal performance but performance genes don’t seem to know if they are maternal or not and the leading edge of maternal performance always was more about performance than maternal which dictated a constant sort or correction to maintain maternal values.  From there, I began selecting for early maturity, fleshing ability, volume and thickness.  Each generation has to relearn the mistakes of the past all over again and I began to see that as my new type began to emulate the small frame easy fleshing types of days gone by,  they also had some of the problems from days gone by.

In 2003 I met Larry Leonhardt for the first time and at the time I was pretty sure I had most of the answers.  After 4 hours in his office, I began to realize that I wasn’t even asking the right questions.  Larry graciously invested time into my education and I in turn invested in his Shoshone Angus genetics.  Having his cows here, and his words in my head I finally began to realize that functional reproductivity has an associative type and that Bonsma described it 50 years ago.  Selecting and stabilizing a functionally reproductive type in this environment is now ‘priority 1′.